I didn’t see the Artiphon anywhere here so I thought I’d mention it. I had one for a little while but the ribbed string surface simulation bothered me. Otherwise it was fun and portable.

I forgot I did a quick little video of me playing some iOS soft synths. 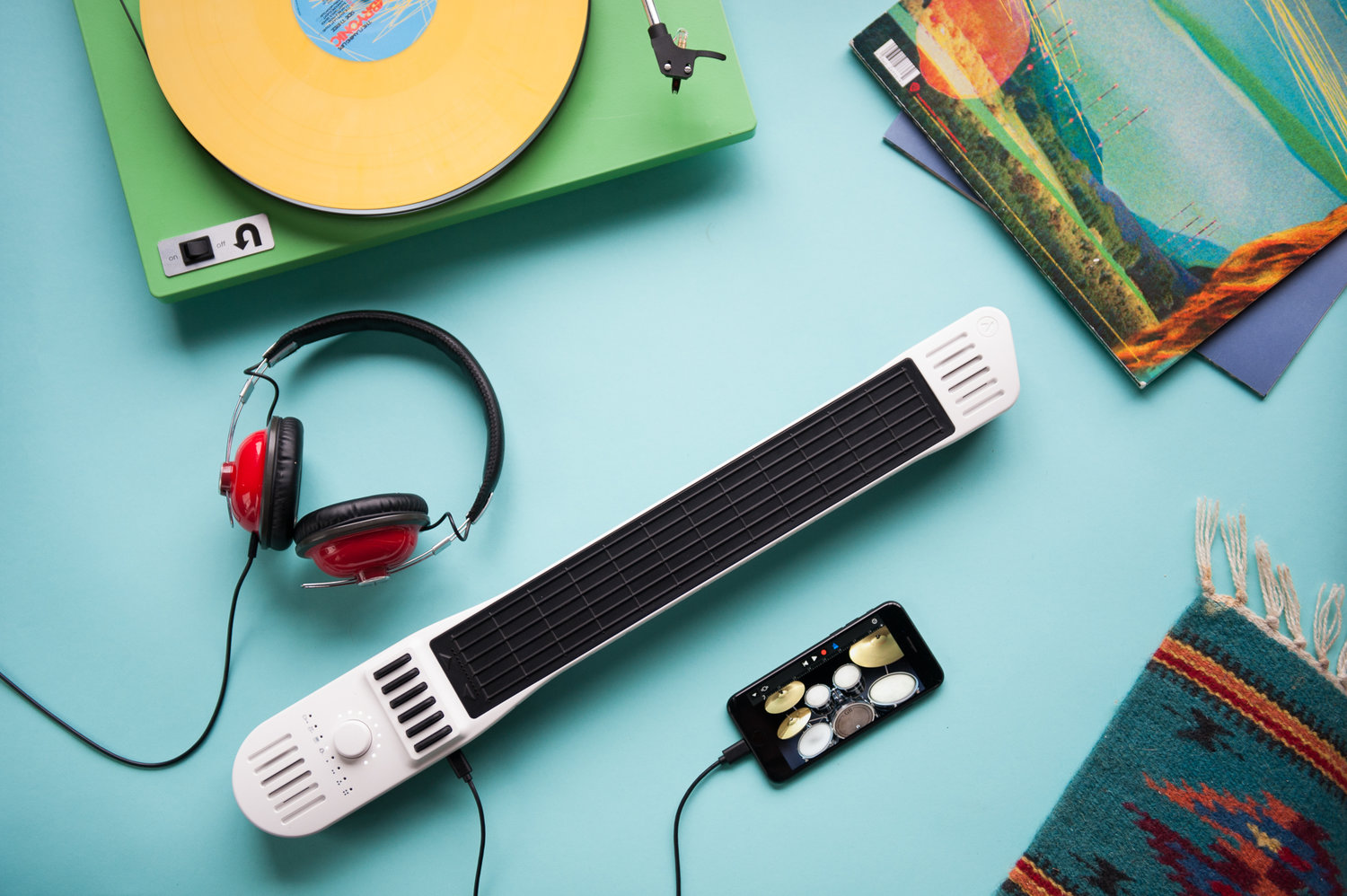 The Artiphon INSTRUMENT 1: a new kind of digital instrument that adapts to you. Strum, slide, tap, and drum any sound on a single interface.

From their web site:

"The INSTRUMENT 1 is an intuitive musical toolkit that adapts to the way you want to play. It’s the first MIDI multi-instrument that lets you strum, slide, tap, and drum any sound on a single interface.

How easy it is to change octaves? I couldn’t find info about this on their website

According to the manual,

CAPO
The capo buttons will shift the tuning up or down. This can be set to shift by one semitone or one octave. The maximum number of shifts is 12 up or down.

Also, depending on how you set it up, you can have up to 78 individual notes available (72 on the “grid” plus 6 for the “strum” keys).

Nice, thanks. I’ve already ordered one to complement my Linnstrument.

Let’s see how it goes

I bought one through Kickstarter. The ribbed surface bothered me as well. As did the “waves” on the Roli Seaboard. The Artiphon was actively unpleasant to use. Might be less so for a guitarist with calluses.

I also found it confusing. Contrast that with the LinnStrument, which I found highly playable instantly.

Not to talk out of turn here, but the Artiphon has been panned, for both hardware and software reasons. That being said, it might actually turn people off to MPE as ‘buggy’ or ‘unusable’.

Ok, I’ve played with it for a couple of hours.

Might be less so for a guitarist with calluses.
Contrast that with the LinnStrument, which I found highly playable instantly.

This! Since I began playing the Linnstrument I’ve lost all my calluses.

hmm, its a pity if its not a good experience, as had some nice goals:

I think the complaints are overblown. I enjoyed it except for the ribbing on the surface and they might not bother some people. Maybe they’ll change that in a future version. The software works pretty well and it was nice to be able to walk around the house with just this, an iphone and make some racket. It even has an accelerometer that you can set up for filter cutoff or something else. Other features include built-in speakers (lo-fi), all-day battery life, direct iOS connection, and MIDI MPE compatibility, I only got rid of it because I already had a Linnstrument and didn’t need another controller at the time.

I got mine as a (much) cheaper alternative to the Linnstrument—a chance to play with MPE without so much of a financial commitment and also a way to maybe learn guitar. I’ve been pretty happy with it overall. I did get a blister on my thumb the first day, and the rubber surface isn’t as conducive to sliding about as a slicker surface would be, but it’s not that bad.

It might be nice to have deeper access to the software (e.g., to add different tunings beyond those included, or to be able to reassign MIDI CCs), but I’ve had a lot of fun with it so far!

Maybe if I had picked it up before the Linnstrument or closer to when I played the bass, I wouldn’t have complained.

I’m a bit lazy, I want to plug and play and I want it to be easy. With the Instrument 1 I had to download an app, update, tweak… and my fingers had to get used to it, press too much, press less…

I enjoyed the bow mode though. Better control of the envelope.

but then again, I played the Linnstrument and realised how sensitive it is.

The LinnStrument is in an entirely different league. It is very much PRO level, supremely well-developed and solidly built; Artiphon is prototype level, at best. They really need to work out all of the design flaws before trying to market it as musician-ready. Again, this is just my opinion and I’m sure there are others that feel differently about it.

I love my INSTRUMENT 1 to death and use it wherever possible, but I also have a K-Board Pro 4 and a Linnstrument 128 (which I haven’t even unboxed yet; my first one went to a friend in Finland and I just replaced it) and the difference in MPE implementation is pretty drastic. As the guy who reviewed it for a major magazine, and who’s been playing one for over a year, I think I can speak with a reasonable amount of knowledge, if not entirely without bias.

The INSTRUMENT 1 is inexpensive but NOT cheap. It’s well-built, light, and works well mechanically. I find it easy to play and configure, and yes, it requires some finger toughness (but nowhere near what a guitar or bass requires). The iOS and Mac/Win control apps are very well written, clear, and easy to use. Overall it gives the impression of something designed and built with care.

That said, Artiphon has been struggling with disgruntled users for a while now. They’re way, WAY overdue for a firmware upgrade, and the I1 is missing some fairly fundamental features that are vital for good MPE use, most specifically and importantly, pitch rounding (which it doesn’t do at all – you either play fretless and hope you have good aim, or play fretted and give up sliding to bend).

I have some other gripes but they’re personal (I believe, as apparently few others do, that there’s still a place for global gestural controls like pitch bend and modulation controls on MPE devices).

Considering that the INSTRUMENT 1 was designed and shipped before MPE even existed, I think the makers can be cut some slack… but yeah, they have got to get pitch rounding working ASAP or they’re going to get left behind. All that said, I end as I began: I love my INSTRUMENT 1 to death and use it whenever possible. (Especially live on stage, where it’s a kickass controller for preventing “hey looka me I doin my taxes!” syndrome.)