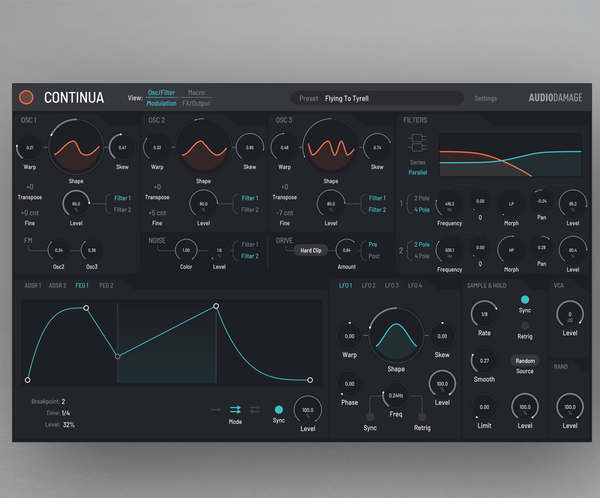 And as with Quanta, it’s MPE compatible.

Pressure smoothing with discrete attack and decay. I hope this becomes a standard as it makes such a difference for people that map pressure to volume. Bravo.

I’ve been waiting for this for a while now.

@n9n9n9 can you elaborate on this? I want to map pressure to volume (or filter, anything that gives me the expressivity of “up and down”) but what does “pressure smoothing” means and how to apply it? Thanks in advance.

On some controllers when you map pressure to volume the controllers output is very twitchy, which is undesirable, especially for when you wish to fade a sound out gently. Smoothing the pressure parameter limits the rate of change so that the twitches are smoothed over. This has a side effect of lifting the sharpness of the attack as well, though, which can be undesirable. Having a separate attack and decay parameter of the smoothing of pressure allows for a sharp attack and for smooth decays both.

Thanks. I think this has been the problem I’ve had with Animoog.

I like Audio Damage, but this is boring. I wish they made something more daring and unusual.

Actually it is a development of their Quanta’s oscillator with a really good approach to modulation.

The thing now it’s whether one needs it or not. Take Pigments 2. It has Continua’s morphing oscillators and a bunch more of waveforms, twice Quanta’s granular engines, a very flexible modulation system, sampler, etc…

I got it for the iPad but I doubt I will purchase the desktop version.

its another one of countless takes on minimoog topology, which was already done sooo many times, and yet AD decided it’s worth making another one.

I too have Pigments and many other plugins, all I’m saying is Continua brings nothing new to me, unfortunately.

I hadn’t realized Pigments 2 is MPE compatible. If so, I need to give that a serious look. I thought I remember Pigments 1 taxing my Macbook’s processing power heavily, but I might be confusing it with something else.

The topology here doesn’t break new ground (neither does Pigments’), but having spent time with Quanta, I think Audio Damage does an outstanding job at audio quality and pleasing sonic character, which at the end of the day is more important to me than having the most impressive specs on paper. They’re a company that’s earned my attention so I’m excited to check this out.