I nearly always use a chromatic scale with the default 4 semitones offset per row. I have all Cs lit green. It took me some time before I had the position of all notes internalized, but now I pretty much instantly “know” where a particular note is in relation to the green ones when improvising.

However, whenever I start playing chords I get easily confused. What helped me find the chord I want quickly was to think of chords in “shapes” across the rows. Almost like Tetris blocks. So I just made a quick drawing of how I visualize the variantions of major and minor chord shapes in case it helps others. With more complex chords I still have to stop and think for a while, but at least this lets me “get by” in a jam session or similar.

The green key is the root note of the chord. Low to high notes from left to right. 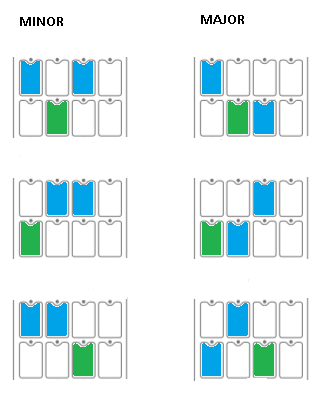 That’s really nice.
I have (again) returned to that layout on my Linnstrument and this time it seems I’m beginning to “see”.

One thing I do for internalizing the place of the notes is thinking in terms of intervals: where is the octave, where is the 7th. I play small progressions with two notes, root and another interval. Or root as bass and then two notes of the chord with the other hand, to learn the relationship between the rest of the notes.

OT: An Eigenharp with just the grid/buttons (maybe also the breath) controller, and half the size, and I would be interested. Like a Pico but with a full range grid. Are these things still in production and is there any hope of an enlarged pico?

I know where to find the three closest 5ths to a note, but haven’t learned other intervals yet. I tend to think in semitones instead of musical intervals, but perhaps I should try to change that? I don’t practice playing scales much either, although I know I probably ought to.

Recently I have felt that my playing doesn’t improve, so I suspect I should start focusing more on this stuff to progress…

I was once obsessed with scales (honestly that didn’t improved my playing). Working with intervals however gives me a sense of the relationship between notes, how they sound together and help me know the instrument I’m playing, once it was the bass guitar, now the Linnstrument.

Although practicing scales are a good way to learn, these days I try to keep to two or three notes pr chord and try to figure something interesting out of it.

This guy http://newjazz.dk/ is really good teaching some improvisations techniques. It is for piano but usable no matter the instrument and there is not too much theory involved. Actually he has a few videos without any theory at all.

Here are the intervals in your chords. 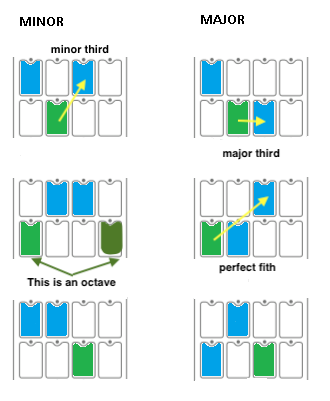