Haven’t seen much stuff about this controller here, but the Birdkids Offgrid shipped to all their Kickstarter backers and are now selling the limited number of remaining units they have assembled. 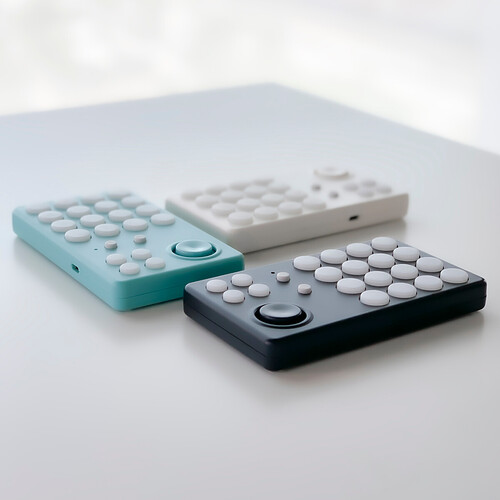 OffGrid is an award-winning, Bluetooth LE MIDI controller made in Vienna (EU) that lets you make music with motion, touch & custom sensor...

I’m pretty interested in have a BLE controller with MPE capabilities since most of my MPE synths are on IOS, but hadn’t wanted to throw my lot in with the kickstarter. But so far it looks really nice! Using this with something like Koala Sampler and split-screen resampling from an MPE synth on an iPad seems like it would be super dope.

I’ve been waiting for this! Thanks so much for sharing!!

But I’m excited for it nonetheless! My only MPE hardware is a Deluge (new beta firmware with MPE confirmed to be coming this week), so it’ll be a great way to pair a small MPE-compatible device with that too.

Very interesting.
But looking at the technical datas it seems that the pads are only sensitive to pressure and that the other controllers, joystick and of course accelerometer, are monophonic.
Doesn’t MPE needs to have polyphonic controls?

There has been some discussion about the OffGrid being MPE or not, including a post from birdkids, in this Thread

I looked at the OffGrid helpdesk an there are some “MPE”-Presets listed. Above it, it says:

“This preset is the default for MPE-enabled Apps. The Motion Controller’s detection is mapped to the MPE Expression parameter CC74 and ModWheel. Notes and parameters cycle through MIDI channels 2-to-16.”

Reading that, i am not sure how and if that gives you per note expression.
How does the Motion Controller Data Channel connect to the Note Channel?

Based on the info i have, i tend to agree with the point @greaterthanzero made in the thread linked above, that the OffGrid has some expressive potential, but is not “real MPE”.

we can see how its assigned here: MPE layout

I’ve noticed a little trend in this area, where some developers/manufactures are just taking MPE as a ‘protocol’, rather than a description of per note expressivity, and in particular polyphonic expression.

basically this means it can means as little as using CC#74, Channel Aftertouch and pitchbend (or even a subset of these) on a note channel - rather than capabilities of a device.

so given the above mapping description my assumption is that this device, probably reads the motion/joystick at the time you press a note, and then creates a note channel with those settings… then if you play a new note (without releasing first note?) moves to the next channel.
this would give a ‘use’ for MPE.
(if it always just uses CC74/AT/PB on all channels theres not much point to using MPE - imho, global CC etc would do the same thing)

but yeah… it does highlight if you see a controller supporting MPE, do not assume polyphonic expression , go check the details.

I think it’s a shame that this confusion is going to arise, but I can’t say it’s ‘wrong’, if you need to use MPE to provide certain functionality to your controller (that can’t be done without) and it makes the user experience better… then for sure use MPE.
(in fairness, MPE was tried to be specified in such a way, that it allow for a wide variety of controllers with very different characteristics)

Just wanted to let you all know that I received my OffGrid and it is awesome. It reminds me of the Orba mixed with a Launchpad. The Orba pads are more sensitive and expressive, but the OffGrid has way more features and much better motion control. I definitely recommend it.

curiosity, how does it compare to the keith quneo?