Max is pretty popular for artists…

anyway, Ive been playing with it for the last couple of days… and today, created by own ‘template’ to allow Percussa SSP users to create/run RNBO patches on the SSP hardware 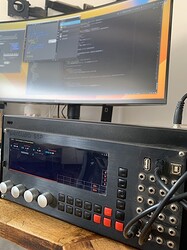 also, I pinged the Bela team, (Bela.io) and they have it also working on Bela hardware, cool for Bela Salt (eurorack) , but also for creating your own hardware instruments.

(C74 have a raspberry PI target which looks interesting, with same PiSound… though Ive not tested it yet… but could be an interesting way to easily create an instrument)

I will say, I think RNBO is a bit too expensive… it also has some limitations.
(RNBO costs 380 Euros as an add-on to Max, though you can subscribe monthly if you prefer)

But I do think it opens up many possibilities for non-developers to dive deeper than they ever have before, in a very well polished environment.
(Pure Data/Heavy could do something similar , free, but its really not that comparable)

Haven’t read from RNBO (apparently pronounced “rainbow”) yet - looks interesting! Steep pricing indeed, though…
Edit: Ah, ok, apparently one doesn’t need a Max license but RNBO works standalone. Then the price is more reasonable.
Edit2: Not the case. As thetechnobear writes below - RNBO needs an additional Max license. Apparently if one has a permanent license of Max then one can only buy the permanent variant of RNBO also.

Pretty sure , you also have to have Max license to create rnbo patches , as RNBO lives inside it.

But you don’t need max , to run code that has been exported.

I will say, I think RNBO is a bit too expensive… it also has some limitations.

But I do think it opens up many possibilities for non-developers to dive deeper than they ever have before, in a very well polished environment.

Agreed. There are specific use cases for RNBO which make sense, among certain categories of non-coder.
For instance, academic pricing (20USD/month for Max+RNBO) is probably ok for a semester of coding to learn the ropes. At the same time, I wouldn’t advise students to spend too much money/effort with RNBO, given the limitations.
One of which is the fact that C74 owns the generated code. Another is that RNBO pretty much requires work in JUCE, at one point or another. Cloud builds are also a limitation, though I hear that RNBO can compile locally (not sure how).

(Pure Data/Heavy could do something similar , free, but its really not that comparable)

Fair. They fit other use cases. And RNBO makes me want to do more work in Pd (with PlugData) and Faust. PlugData, in particular, could be neat on Pisound directly because it puts a convenient patcher in LV2, VST3, and Audio Unit plugins directly. Haven’t tried in MODEP directly. It could really open things up.

What are the terms of the license for commercial usage?

We reserve the right to change the terms and conditions of commercial use of code generated with RNBO versions greater than 1.X.

so basically, currently, worst case is having to ‘register’ your use… but no fees for VERSION 1.X
its that last bit… if it was a bigger project, you might get stuck on version 1.x, as they might introduce fees for 2.x!

in fairness though, I think C74 are, as this times, just keep options open.
and Im not sure the type of commercial projects thats use RNBO, will really need to upgrade RNBO at a later date… but yeah, you’d have to go in with your eyes open.

as for JUCE… yeah, theres very little UI possibilities in RNBO, for any target …
but frankly, thats ok, imho… once you go beyond some pretty basic UIs , your going to want the abilities to write full custom UI, and doing this with C++/Juce is a pretty reasonable route.
and yes, everything can be compiled locally - thats a non-issue.

so yeah, beyond prototyping, things get a little more complicated, but the basic approach is still good.

anyway, Ive been having fun with RNBO, diving a bit deeper…

there are a few limitations currently, Id really like some more meta data available in the generated code, this is proving a bit limited at the moment.
I can get around this by parsing some of the json thats generated alongside the C++ code, but thats a bit of a faff…

running on a rPI w/ PiSound is a nice experience…
Ive got a few PiSounds knocking around, so Im going to code a few instruments for those 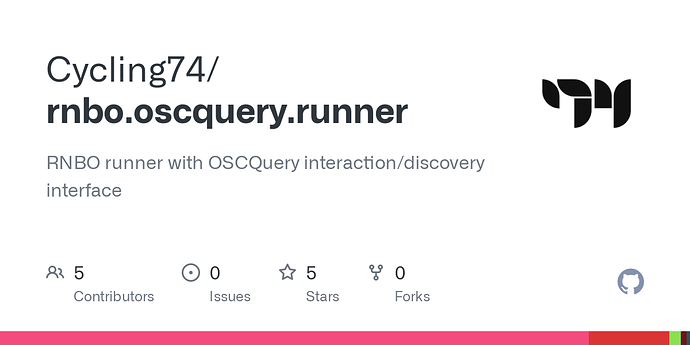 Ive got some other ideas for other platforms to use RNBO… though, I’ll probably dig into those only once Ive got a better feeling of how useful I find RNBO.

the SSP RNBO template is working nicely so far, but I need to figure out how to provide a build environment to end-users that won’t require dev experience… theres a few possibilities here.
including potentially just building the on the SSP itself.
(I use a cross compile environment, which Ive documented, but I fear its just going to be too intimidating)

I’m in an odd limbo. Owning a perpetual max license, I’m denied the option of monthly rental on this add-on. But I also can’t afford to purchase that outright, yet.

(It will resolve itself soon enough. For now, I just can’t save my files.)

Anyway, I am glad to see you’ve built an SSP integration. I actually came here to ask for recommendations on that.

yeah, I was in exactly the same situation…

the perpetual license fee for RNBO seemed excessive without knowing how much use Id actually get from it… or the experience to know its shortfalls.
sure, you can use the trial (incl exporting) without saving, but that gets tedious quickly.

I did also consider, buying another Max+RNBO license monthly to give it a go, but that felt like a waste.

fortunately, I had a generous backer on the SSP who was keen on RNBO, and they paid for the RNBO licence, otherwise Id have shelved the idea

(I reached out to C74 to see if they might donate licenses to open source projects, but they were completely uninterested, didnt even offer a discount)

I do think this is going to come back to bite C74, for wider adoption … but thats their choice.
I think for now, it’ll be largely a few early adopters who’ll mess with it for a bit.
then perhaps in a year or two, it’ll be folded into Max (as was the case with gen/jitter), then it’ll get wider adoption?!

of course, we are also in an early stage…
there will be a bit of a shift once Ableton Live , gets moved to Max 8.5… so that M4L devices can be converted to use RNBO~.
I think this will be an important step, as Ive a feeling RNBO is mainly for Max users who do not know C++ - and I think the M4L developer are likely a good chunk of that user base.(*)

(*) caveat, we are talking Max users focused on AUDIO only…
since there is no jitter support in RNBO, so the big contingent of AV max users, dont have a lot of use for RNBO,

Am also in the same boat.
I was actually an avid Synthmaker (now FlowStone) fan back when I was a student and made a number of things with it (mainly MIDI utils but also some experimental synth stuff). And RNBO is this on steroids. If I should have a concrete project at some point I might bite the bullet. But just for experimenting it’s hard to justify.
Also it appears odd to me that a company that sells a compiler claims ownership on the resulting binary. Even if they grant a free usage license for the moment.
That all sounds a little greedy. Could imagine it would be more successful with a more modest approach. But it’s their product of course, so they can set up the conditions as they see fit. (And I my purchase decision…)

Also it appears odd to me that a company that sells a compiler claims ownership on the resulting binary. Even if they grant a free usage license for the moment.

we first have to exclude open source projects like gcc, as they operate on a non-commercial model.

so we turn to VC++ (Microsoft) and Xcode (Apple), and their respective SDKs.
Microsoft, originally, did charge a lot for its dev tools… but they switched tack, after realising giving away dev tools, makes Microsoft Windows more attractive/popular with more applications built.
Apple followed suit with its offering, really without much choice for the same reason… but of course have hardware sales to add to the mix.
so both make money indirectly by making their OS/hardware popular (as well as their dev programs, and now apps stores)
being so dominant in the market, neither left much space for alternative products to be sold.
(except in the specialised hardware chip market, where dev kits can still be very expensive)

an alternative, used by many other dev tools, use a different models… just as C74 does with Max, requiring you to have some kind of runtime for users.

also you can argue, RNBO is actually, much more like a SDK/Library, then a compiler…
the ‘intellectual’ property is not so much the generation of the code, thats pretty straightforward.
but rather the pieces of (template) code it is gluing together.
e.g. the bit of template code that is groove~ , likely comes from the max source code (adapted of course)

so this is what C74 feel you are benefiting from…
in the same way as if I sold a graphics SDK that made creating open gl graphics easy in your product.

and yes, SDKs get sold with license very frequently…
in many ways, JUCE is very similar, it contains both libraries and and generated code.
that said, I remember, when JUCE changed its licensing terms… it created a lot of very unhappy users.

its tough… I think most recognise/believe that C74 have a right to generate revenue from product created with their product… but how to do that? and how much is reasonable?
you probably aren’t going to please everyone…

of course, you can also take a step back, and say, its not just dev tools…
software pricing/licensing is going thru a huge revolution… with increasing use of subscription models, paid add-ons… it makes sense, but many users don’t like this either, and theres a fair amount of toxicity in some areas about this, really breaking down trust between devs and users

also you can argue, RNBO is actually, much more like a SDK/Library, then a compiler…
the ‘intellectual’ property is not so much the generation of the code, thats pretty straightforward.
but rather the pieces of (template) code it is gluing together.
e.g. the bit of template code that is groove~ , likely comes from the max source code (adapted of course)
[…]
its tough… I think most recognise/believe that C74 have a right to generate revenue from product created with their product… but how to do that? and how much is reasonable?
you probably aren’t going to please everyone…

Good point, the library part is probably bigger than the compiler/runtime thing.
To me the envisioned concept sounds a little like games that cost full price and then additionally monetize relevant ingame stuff with microtransactions. I understand that companies might be inclined to a “why not both” stance - if they can get away with it, and given that analysts downrate companies that “just” sustain a healthy business - it always has to be growth at all costs.
That said, even though they keep the door open for such an approach with their license, currently C74 doesn’t do this yet - it’s just the entry fee and if pay-per-distributed-plugin should become a thing it’s not clear whether this would be alternatively or additionally.
So let’s see how this develops. As said, I might even buy it at some point if a concrete need arises.