Recently got this and been doing some development for it 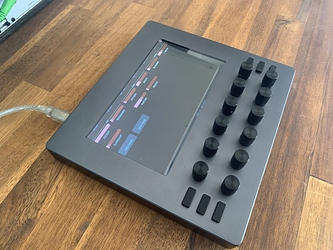 (in person the screen looks much better, for some reason, photos picks up more reflections) 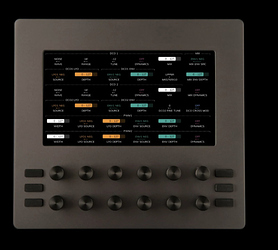 so its not expressive … but I wanted something allowed me to contol synth parameters, so its a great companion to expressive controllers which often have few faders/knobs.

have to say this is really well made… (yes a little pricey too)
12 high quality encoders, and a lovely touchscreen display …
works totally standalone, has 2x midi in/out, usb device, usb host.

basically it works by uploading presets that define any kind of midi mapping (bi-directional, even sysex) to the encoders, or to onscreen controls (e.g. touch buttons)

to define presets, electra one has a web app that does the editing and management of these presets (*)

however… the format for upload/download is fully documented (basically a sysex containing json), so you can develop your own software that communicates with it.

e.g. use a raspberry PI headless(**) , then simply connect this as the hands-on display for Orac.
of course, also connect a playing surface - keyboard/eigenharp to the PI too.

as I say, a companion to your playing surface, so you can control synths.

still a way to go on my developments… e.g. Im also considering ways of using it to ‘extend’ my eurorack setup…

anyway, thought I’d share this little bit of tech, as I don’t think its getting much exposure at the moment…so might be unfamiliar to many.

( *) whats nice here… is they have a concept of ‘instrument’ definitions, so you can define your synth types, and then easily create a preset from multiple ones of these instruments.
e.g. say I created an instrument definition for say my Virus TI, Octatrack, a soft synth running on Live.
(this definition is the messages it understands)

from this i can then create a preset, which is a combination of this.
page 1 - a mixer section for the Octatrack ,
page 2 - most frequently used knobs , say reverb level on octatrack, virus, cutoff/resonance on synths on TI and Live.
page 3 - specific TI controls
page 4 - specific Live controls

I love the way this mix n’ match works, so you can define a user interface that reflects your setup as whole, rather than controls for particular synths.

Ohh I do recall this one… nice you are “integrating” and giving it your “touch”.
Fun times ahead

I think it does makes perfect sense to have some sort of side-control to an expressive instrument; and also a visual feedback.

yeah, I was definitely lacking a midi controller that just had a ‘bank of pots’ or similar…
I’d used the Push2, but its very large - and often Im not using the pads (75% of its size) , E1 is about 1/4 the size…

as mentioned I looked at the FaderFox EC4, which is 16 encoders - but with only 4 characters to describe each function - I felt it’d be a bit cryptic. in fairness quite a bit cheaper, and I do think its still a great controller.

on the E1 , I have to admit, I wasn’t very much into the idea of a touchscreen but actually Ive found its really invaluable - it means the encoders can be used for synth values that need fine tuning. but you can throw a button or slider onto the screen for ‘auxilary’ functions - its a nice balance of tactile knobs/buttons with the flexibitity of touch screens.

anyway its an interesting option… as Ive been doing some dev on it, I’ve been talking alot with the developer, and he has been really keen to implement improvements and ideas (some really nice touches just in the last few days) … and some interesting ideas for the future

Aah this seems nice, I also was on the lookout for some device that lets you abstract many controls and I went for the EC4

I am pretty happy with it, but I think I will complement it with some custom touchosc templates for better buttons and precise inputs
The Electra One seems to bundle all this pretty neatly!
It’s sad that these controllers don’t support osc, their precision is so limited by midi. But maybe this is a future option for the Electra One

really you need wifi for osc (its not a strict requirement) , perhaps wifi could be added as a usb dongle to E1 (it has a usb host port) , but I suspect its a bit ‘out of scope’

one nice thing about the E1, is you could quite easily build an OSC bridge… argubably this is what Im doing with MEC (but its not a generic osc bridge in my case, its a specific target area)