Most of the firmware for the synth engine comes from Haken Audio, so you can send suggestions to support@hakenaudio.com. In my experience, they are extremely helpful, kind, and responsive.

#1 - That’s the way to save presets in an accessible place - it isn’t called “favorites”, but it achieves the same purpose. Of course, it takes up one of the 128 available slots for custom presets, but I’d be interested in hearing about anyone that actually has that many (and isn’t a Haken Audio team member:-).

#2: When using as a controller, use one of the Midi category presets (e.g. “MPE+ 08 Voice”). They don’t use the engine at all, so don’t generate any audio (plus they’ll run faster).

I suspect Haken will want to ‘field’ as much support/feature requests via Expressive E as possible.
… as some parts of the firmware (e.g. the display/control side) will be by Expressive E not Haken.

but for sure, purely engine side, or the editor is haken audios realm,

I did think this too… so we dont have to have duplicates in the user slots.
but on reflection, I think, I’ll tend to tweak ‘my favourites’, so perhaps duplicating is not so bad.

I think this perhaps is conceptually ‘tricky’…

when you select M-> Ext Midi … although this appears to be a mode, in practice its actually is more like ‘settings’ i.e. the M key is just selecting which ‘display’ is active… not actually putting in a different mode.

in many ways this is a strength (imho), as it means you can layer things - so Id not want that ‘taken away’

currently the way to ‘stop this’ is.
M → global settings → options → haken local control = OFF

its just like other synths I have… local control = disconnect synth and surface.

this approach has other uses too… e.g. where you want to go via a daw or hardware sequencer.

What could be nice is if Expressive E put this on the main ‘M’ screen, e.g. encoder 1?
then it would be much quicker to access…

@pachde the osmose has different presets, and does not include the midi ones.
of course, you could create these in the EM very simply and even use the category.
but they are not there by default.

Interesting - In my Haken Editor installation, there is a folder of presets for the Osmose, and it includes a number of the MIDI presets. 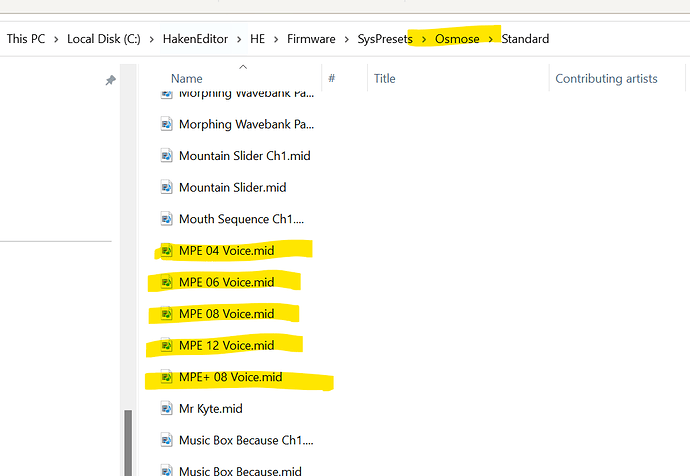 Also got my Osmose yesterday - yay!
Updated the firmware via OsmoseUpdater and then followed the steps to connect to the latest HakenEditor. After that the HakenEditor brought up a message that an update of part 2 of the firmware is needed (which afaik are just the presets). Thus I used to update function in the Editor and it overwrote the presets. Now the message doesn’t appear anymore. Am I the only one in that boat?

The playing experience is really great so far! As we are in the feature requests thread:

Re: Installation on Windows.
This is not necessary. The Haken editor can run from anywhere (just not from the zip file directly). Mine is running out of C:\HakenEditor (Windows 11).

Re. bundled Max runtime.
Haken Audio is working on a new editor that isn’t dependent on Max. Until that happens (no known schedule), I’m guessing it will stay this way, because it enables independent servicing of the Max dependency without needing to wait for the small Haken Audio team to build and release a new bundled version. This is good because there have been a number of issues recently in this category.

Thanks for the feedback! Good to know!

Regarding installation destination. Odd, initially I uncompressed the content of the zip file to a folder on D: - where it complained that it coulnd’t find some files in HE\ (even though this was in the same folder as the maxpat). But whatever, after copying it to the location it was looking for it works now!

Yes the update file 2 thing is normal but I think expressive e left it out of their page of instructions for getting the editor working.

Hi there !
First suggestion would be : octave +/- on the keyboard should work with midi.

First suggestion would be : octave +/- on the keyboard should work with midi.

With initial firmware they’ve made the octave buttons only affect whichever midi layer is being configured by what you currently have on the Osmoses screen. So if you are in screens that control the built in synth, the midi that is affected by octave buttons is the Haken MPE+ midi that comes out of USB port 2. But if you have one of the screens open for configuring ‘ext midi’ then the octave buttons only affect the midi dim and usb midi port 1 output. I raised a ticket about this issue with them last week, didnt get a response yet.

Also if you change octave for the non Haken midi output while holding notes, when you release the notes the wrong note off messages are sent, ones for the new octaves are sent instead of the octaves of the originally held notes, so you end up with stuck notes. I mentioned this to them too. I dont think this issue happens with the Haken Midi and built in synth.

Thanks.
This is indeed a problem. I’m using Max MSP to experiment building MPE instruments. I have to use Osmose Port 2, and octave won’t change on this port. You’re right, it will work on Port 1 (useless in this case).