How to play two notes on one key?

I thought if I add a second scaler in parallel after a keygroup, I would be able to play two notes with a certain interval. But I get only one note at the MIDI output.

Tried a second keygroup output for the second scaler and enabled it. Nope. Tried completely independent paths (keygroup out, scaler, MIDI converter, MIDI output) but still get only one note.

Should I go debugging or is this not possible at all?

I believe you would need to write a custom agent to do this.

EigenD is not passing ‘notes’ around, its based on streams of events, which have an id, so basically if you wanted to do something like have an ‘arp’, you’d be have to create a new event stream.
iirc, this is what the sequencer does… and what i did when i created the soundplane agent.

@thetechnobear
Nice to see you around

@peter_ostry
Back in the days I have done some playing with that; mainly to achieve chord playing with one key.
Here you can see 4 key groups (selectable 4 notes) feeding a audio unit.
edit: oh you can pass all that easyly into a midi converter>midi output.

So there is a catch… HOW to do it?
“channels inside the wires” - so to speak 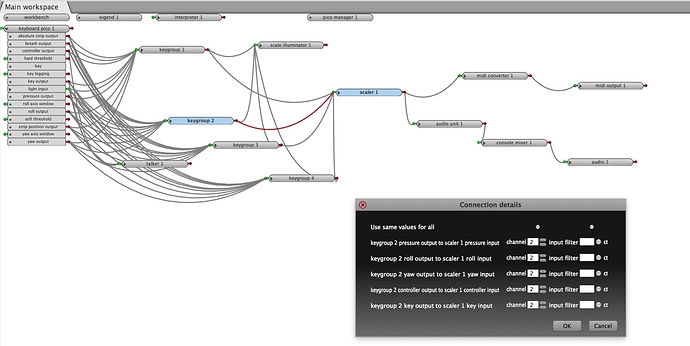 thanks @keymanpal … finally out of bed, and not feeling

he, he … not surprised in the slightest to see that you found a hack creative solution around it …
Id forgotten keygroup create new streams… and never tried to recombine their outputs

Oh, multiple keygroups. The only thing I haven’t tried yet, but quite logical. Will see/hear how it works. Thanks.

I cannot set each keygroup-path to a dedicated MIDI channel. Seems only to work with one scaler/converter. But well, it is good for experimenting as it is.

I cannot set each keygroup-path to a dedicated MIDI channel.

Care to elabore/explain a bit more?

I want each keygroup to go to it’s own MIDI channel:

Path 1 works, path 2 does not send MIDI out. Would not care about a second MIDI output but this also doesn’t work. I’ve systematically set the EigenD internal channels for each connection to no avail.

Your setup, that collects the keygroups in one scaler, works. But I want to play two different synths, so I need different MIDI channels or two MIDI ports.

Sorry only now…
It is possible:

No sorry, this doesn’t work here. Built it three times from scratch and only one time got output from scaler 2 but not from scaler 1. The other versions delivered scaler 1 only. I am still not sure if this double-scaler-connection method would deliver the two scalers on their corresponding channels, which is necessary. I’d rather expect alternating channels, more or less independent from the scalers. But you know more about that.

Furthermore, I am irritated that a most simple routing, where each keygroup has it’s own scaler, converter and output, does not work. This tells me that the software does not like what I am doing.

However, thank you very much for spending your time, but I give up. This is not the kind of software I want to work with in more depth than necessary. I know that it is not built for MIDI, but I cannot use my instruments inside EigenD because of the unreliable and often crashing plugin scanner, the 32/64 bit versions of EigenD and some instruments that do not show up while they do in other software. So I had to violate the basic idea of EigenD and turned it into a MIDI machine with, well, acceptable latency. Apologies to John.

With RPC and other help from this forum I got much more than I dared to expect after the desastrous beginning and I am happy that I have a solid EigenD configuration. Will do the rest in other software.

Just to check, are you setting the channels on the wires as per @keymanpal’s screenshot?

Yes I do. I tried on the wires going to the midi converter (as in the screenshot) and tried on other connections also.

Please note:
The original question was answered and I can play intervals/chords. Binding the voices to dedicated MIDI channels was an additional idea. Not really bad if it doesn’t work. I can play the voices some octaves apart and separate them later by note pitch.