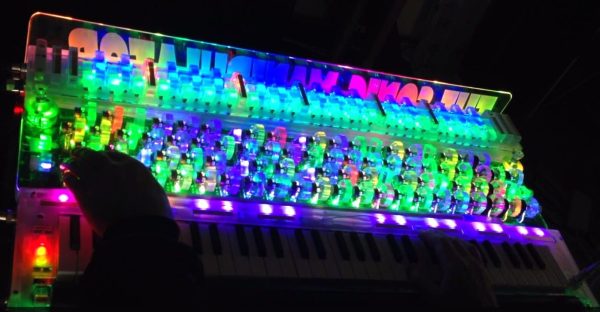 “Constant real time timbre manipulation is what acoustic instruments do so well. It’s time synth players did the same thing to breathe life into those electrons.”

Here’s what he has to say about his setup:

The whole rig consists of the Loopatron (Mk2) at the back, the 61-note keyboard at the front with Vibe Bar and the Claude Controller Mk 3 in the middle. I call it the MIDI CONTROL MONSTER!

I believe for electronic music to evolve we need an ergonomic ‘standard’ interface. Constant real time timbre manipulation is what acoustic instruments do so well. It’s time synth players did the same thing to breathe life into those electrons.

If anyone would like to build one I can supply the code (Arduino 3.2) and laser files for the acrylic.

This design (the Claude Controller) is my bid for a ‘standard’ MIDI controller. When set up properly it can precisely control everything. And if you need more controls – add more octaves.

It’s a sensible alternative to a chaotic conglomeration of wires & knobs which is often the case.

Details on the custom rig are available at his site.

Looks expensive… If you still want a standard keyboard and don‘t like the touch and feel of a Seaboard, you could use the touchkeys (also expensive). http://touchkeys.co.uk/
I turned a Seaboard block into a 27 fader box with a Max patch, two of them would give you 54… But it would miss the colours…
What is a Loopatron? Never heard about it and Google did not come up with anything useful…

Not sure what Loopatron is. The Touchkeys look nice, they are expensive and it looks like the DIY versions are out of stock.

From the close-up shots it looks like the sensor surface on the keys of that Touchkeys may be similar to the playing surface on the Arturia Microfreak.

Here’s another midi controller. Might possibly be the ugliest IMHO pedal I’ve ever seen though it’s been getting awards. https://effigylabs.com

I would love to incorporate the wheels into a setup with the LinnStrument to modulate multiple macros at the same time.

From the close-up shots it looks like the sensor surface on the keys of that Touchkeys may be similar to the playing surface on the Arturia Microfreak.

Yes, but the Touchkeys have a much higher resolution. With the Microfreak Arturia missed it, they could have implemented MPE. I am sure the hardware would be capable of doing it…

Perhaps, but at what additional cost bearing in mind that this is a very inexpensive synth with a lot of new things in it?

I got the impression from some of the launch announcements that many technology aspects from the Microfreak will be translating into a new range of synths for them, featuring that extensible digital oscillator they’ve put in there. So Microfreak is a first of a line I think. Perhaps there’ll be higher-end models that will come, maybe featuring even something more like Touchkeys?

Who knows, but it’s fun to speculate.

Perhaps, but at what additional cost bearing in mind that this is a very inexpensive synth with a lot of new things in it?

The cost would be just software developement, but that is a guess. I simply have the feeling, that the Arturia devs have not understood yet what expression is. The new Pigment synth could have been expressive, but its not…
I have no idea how many MikroFreaks they plan to sell. If it would support MPE it would be an instant buy for sure. For that price range there is a lot of competiton already… Without MPE its just another synth with an interesting, but less capable control surface than what I have already…

For you as someone on this forum perhaps, but for the grand market, most folks don’t know what to do with MPE yet, and support in the ecosystem is very mixed.

Plus, folks kind of have to learn ways to use it (hence we have the other thread on this forum where the very valid question is being asked about learning materials, albeit for much less “traditional” controller styles). In real terms it may also be that poly-aftertouch feature is enough for people to do a lot of what folks are using their MPE controllers for currently anyway, and learn about new expressive ideas (which is also I guess why the Touché Expressive E is widely liked, as it gives expression, but in a package that folks can get to grips with and add simply to their current way of working).

And if it’s just software, that would be good news as potentially it could be something that could come later in a firmware update when it’s ready, and should they choose to do it for that product level in the range. (It could also be that doing a full-fledged MPE experience and having it tuned right to work well could take time also).

I think at the price point its at, that synth is going to sell like hotcakes (and they fully intend it to), as it offers a bunch of new, cool things for many people at a very reasonable price, and then they’ll take it from there and we’ll see the feature set of what else they decide to stand up in the product range. (My guess is that they’ll also be looking themselves with interest to see how people use it and what features they ask for, to help them refine future product feature sets in the range).

It is interesting, that the bigger the company the less they found their decisions on innovation and the more just about money. If there is only 1% of the customers jumping on groundbreaking novelties they don‘t care. Maybe that is a good thing…

But to come back on topic, one of the innovative small companies has instructions for a DIY expressive controller:
https://madronalabs.com/DIY

One way to look at it is because some of the larger companies have yet to adopt MPE, it keeps the community tight-knit, niche and dedicated. These are halcyon days, my friend. Not unlike when any revolutionary technology was on the cusp, but had yet to be fully adopted (i.e., automobiles, airplanes, electric guitars, personal computers, etc.). Enjoy it! Most people don’t know what it feels like to be where we are at. Soak it all in; relish it.

Have one. Love it. Not quite as butt ugly as the one in the video - they changed the color scheme a bit - and a little ship-in-a-bottle to program, but it feels SO good to play. All the money went into making it super smooth under your foot and basically indestructible. If you’re a two-handed player who wants to throw in bends and mod wheels as you play, you can think of the Effigy as a Roland paddle for your foot.

And besides, who cares what it looks like? It’s on the freakin’ FLOOR.