The main way of exploring microtonality with the Striso board is by using different syntonic temperaments. For these tunings the nice thing is that the isomorphic properties of the keyboard are kept.

A selection of temperaments is directly available from the board itself. These are 12tet, 31tet, 19tet, 5tet, 7tet, 1/4 comma meantone and pythagorean.

Other syntonic temperaments can be selected by sending a 14bit value to CC1 (LSB to CC33), this set the size of the fifth to anything between 680 and 720 cent, similar to how the tuning is selected in my online tuning exploration tool. This is also how the Striso Temperament Compass works.

In the near future I plan on implementing a configuration system, which let you set a pitch for each of the 17 keys per octave. Also I’ll implement a 7-limit Just Intonation tuning and Indian Shruti tuning to be directly available.

If there are wishes for other options feel free to discuss them here,

I know you’d planned on sharing the source code at some point in the future. I imagine there are a number of ways people could experiment with different configurations in the general sense if it were available. Do you have a rough timeline for doing that?

Hi Frank,
Thanks for asking, the source needs some checks and a readme update. Shouldn’t take too long. It helps when people are asking for it though

The source for the previous version and for the bootloader are online already.

@fkberthold The source code is now updated to the latest version!

You are godly in my eyes!

I just downloaded the source, after adding the necessary compiler I was able to modify and customize the default settings (config.h & synth_control.cpp for anyone who’s looking), compile it and drop the new build on my Striso without breaking anything.

Of course without a bit of fooling around I won’t be 100% sure it worked. I’ll have to change an LED color or something a bit more obvious to be sure. But, this is fantastic. Once again, thank you for all the hard work.

I’ve got several requests for the non-octave Bohlen-Pierce scale, and found two appropriate options to map it to the Striso. The colors of the keys don’t make much sense, so I’ve shown those with the line thickness for reference. 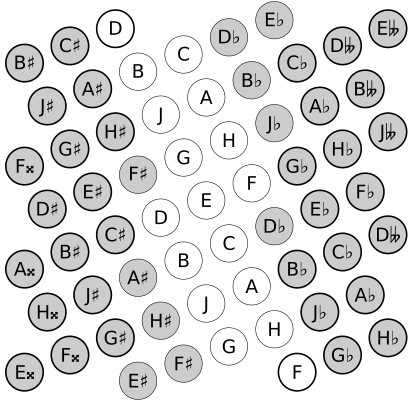 Option 2, where the tritave takes the place of the ocave: 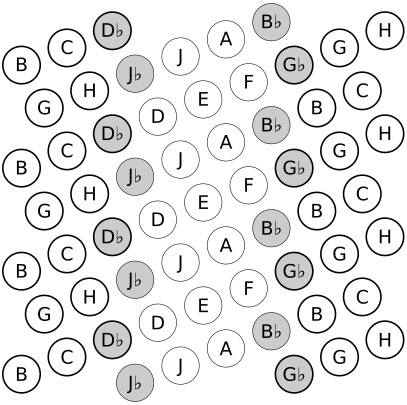 Both are isomorphic, and interesting ways to explore exotic harmonies.

For now I’ve put them on the last two free slots of the tuning row (until the configuration system is in place). They’re available in firmware v2.0.5.

For less regular tunings I still have to implement the configuration system.

The newest firmware release, v2.1.4, has some new microtonal options. Support for irregular tunings was added, with for now a 7 limit Just Intonation tuning, where all notes have pure intervals with the C. Below you can find the ratios.

Another feature that was added is free transpose. With this feature the pitch of one button can be translated to another button. This makes it possible to play for example all notes of the 31 tone tuning, or choose a different root note for the Just Intonation tuning. The way this works is by playing a note, then pressing the up and down buttons together, and then playing a second button (while keeping the first pressed). The second button now has the pitch of the first button and you can continue playing seamlessly. This may be clearer on a video, I hope to make one when I find the time, but if someone else want to make one I’d be more than happy.

The firmware update can be found on github.

Hey Frank! Thanks for posting. I’m testing out some custom layouts/tunings as well. I’m editing synth_control.cpp right now. Would you mind sharing how you compiled and put the new custom firmware on the Striso?

Welcome to the Striso Tinkerers Club

. I figured the setup for modding the Striso was a bit in the weeds for this thread, so I started a new one. Feel free to drop me a message if you run into trouble with it, and please share if you have exciting successes.

I completed a new JI layout by altering synth_control.cpp. Here it is in case others want to try it out or just investigate how to play with custom tunings.

It’s a tuning for 5-limit JI, rather than 7-limit and attempts to solve the dilemma of needing both major seconds (9/8 and 10/9) when playing in just. The black keys on the right have been altered to mimic the white keys, with 9/8 replaced by 10/9.

Thanks for sharing your tuning. To make it easier to make and share tunings I’ve made an editable spreadsheet with tunings where you can add your own to calculate and share the required values.

There might be a mistake in the 3rd note (C#), which is 0.0, meaning equal to 12tet, so not just. I hope the spreadsheet helps reducing the mistakes.

In the upcoming config editor the values can be pasted on the Striso board without recompiling, making custom tunings again a lot simpler.

Hi Piers, that sounds great, thanks!

I actually just made the C# a duplicate of the C (changed the note layout as well as the offset). My tuning has a lot of repetitive notes, but it’s working out nicely for intuitive playing so far. And since I sacrificed the 7-limit notes, I have plenty space on the board for duplicates