well at this stage its just a tease, for a reveal in March

but who knows, Roli loves its marketing hype

I find the seams along the surface to be a big difference to the previous one. Also, the pitch black oval shapes seems to be indents for screws.

The proportions, I think, given what’s discernible from the glossy mystery pictures, are somehow reminiscent of the Linnstrument.

This would then be minimum three octaves with a flatter, smoother playing surface. It looks like they kept the piano layout. Are the the curves more button like than like keys?

dunno, hard to tell scale…
I think at the angles they show ‘waves’ looks quite similar to rise…perhaps squared off a bit
it also looks as slim, but no reason they couldn’t put some dsp in there…

this is the most different part… 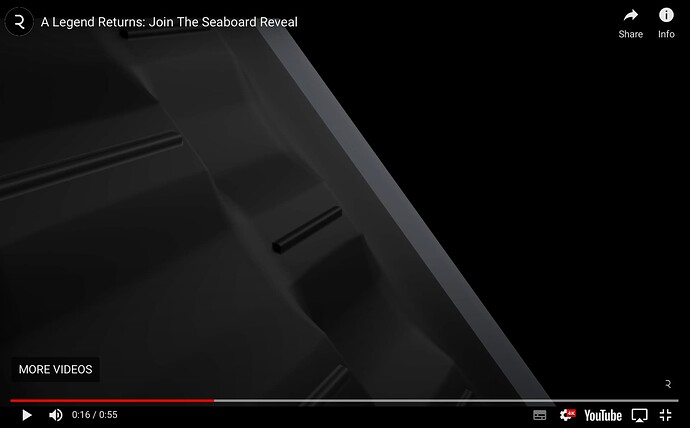 this looks like it might be the along the long edge, top or bottom?
so perhaps a refinement to the ribbon… ridges for each ‘key’ to make it easier to slide to different notes?

but its obviously very vague as a tease…
I think its at least a Rise 2.0 , but really hope they make it a complete standalone instrument , like the original (but at a more affordable price)

… perhaps they want to compete with the Osmose?
(though, we are still waiting for our pre-orders… so general sale of the Osmose could be a while off yet!)

I feel quite silly zooming in on marketing pictures but what can you do sometimes!

I think it is top edge, as it looks like all regular keys/waves have ridges and we probably see the bottom part in the horizontal pictures. The ribbon seems to have fewer ridges (perhaps only C:s?).

I am not sure about stand-alone instrument. I have just tried the Roli Seaboard a few times, though, and also then Roli Grand. Affordable and stand-alone would probably be a very nice combination, if possible. It would also (on the other hand?) be nice to have it less reliant on Roli Software, Just clean and connectable with or without cables.

What I do hope personally is width of the keys/waves more similar to the Roli Grand. From the Image, it is possible this could be the case. They look quite wide, but I may be imagining!

I also hope for easier times for the Osmose and Expressive E. I remember feeling a bit bad for them around one year ago when the Lumi firmware was updated with (per key) pitch bend. A ‘first in the world,’ or something like that, in the Roli marketing.

Not that it wasn’t or that they did not deserve it.

merely the fact that there may now be two Roli products/announcements (as well as a company restructuring);between the Osmose original release window and now!

I wish them both well.

Roli does not have a great track record with supporting their products after launch. Like, at all.

One of the things I most appropriate about their controllers (save for Lumi) is how little we’re forced to rely on their support, and how much the community is able to pick up their slack.

I’m one of Roli’s earliest adopters, biggest fanboys, and worst apologists, but… I would not purchase another self contained synth from them, at any price.

Fun! It looks like they truncated the “white keys” so that the Y dimension of “white keys” and “black keys” is equal

So, it’s there. No embedded synth engine it seems, comes with the full version of Equator 2 though.
Anybody getting one?
Still have the old one. Good thing is (as @greaterthanzero wrote) that it still works like on day one and there is no indication that this should change anytime soon. Which also means - no reason to buy a new one for me

yeah, its a Rise 2, definitely more evolution than revolution from the looks of it.
… which is not necessarily a bad thing.
definitely looks stylish !

it’s quite interesting to see how each release, they square off the wave even more.
in the accompanying article on Roli website, Roland Lamb basically says users are saying squarer waves make it easier to play, to find the centre of the note - so keep in tune.

I think quite different from the Osmose… and also a bit cheaper (list price),
I hope it does well for Roli, and definitely good to see them going some back to their ‘grass roots’

I also hope they come to superbooth , so we can get to try

Now that I have mastered the old style keywaves, I don’t think the new ones would work that well for me. It took me five years to get confident enough to take it live. Probably not going to switch it out unless both my 49s die. I might have gone for it if they put a sound engine back in, but I am in the market for a rise 25 to fit into carry on.

Agreed. This is Roli re-committing to their pro users, and bringing the 49 back, in a way that doesn’t alienate their whole userbase. It feels respectful and appropriate.

I would like an upgrade path on the keywave surface, though. Let’s make Rise 1.5 a thing.

I guess the keywaves cannot easily be exchanged. Think it’s all glued together?

And even if it was, ROLI are not the sort of company that would be interested in facilitating such things. Plus they want to sell the new one to existing users, including by offering a discount.

Users of the originals are due to get a firmware update in October though.

I suspect @greaterthanzero didn’t mean to upgrade existing hardware , rather that the Rise got a similar upgrade … so Rise users didn’t have to go to the ‘full size ‘ seaboard.

as for upgrade ‘deals’ on hardware , pretty much no one offers this, it’s not really viable for a company.
There’s been the odd pcb switch , but even that is extremely rare

No, I think he meant existing hardware surface upgrades and your post is confusing because I think you’ve misremembered what the Rise name covers. Both the 25 and 49 key full key size ones were Seaboard Rises. The smaller keys & form factor ones are called Seaboard Blocks.

Roli probably brought back only the Rise 49 as a version 2 at this time because they could only afford to relaunch one at this time. And thats the one most likely favoured by ‘professionals’. And it is also possible that the profit margins on the Rise 25 and the Seaboard Blocks was slim to non-existent. Not the Roli have a clue about how to be profitable or sustainable with any product so far.

No, I think he meant existing hardware surface upgrades

well thats very unlikely to happen , companies (in any field) very rarely do hardware upgrades.
it makes very little economic sense…(you potentially sabotaging your own new sales, costs you money for little to no return) and has a lot of support issues attached (*)

only really seen it, when there are warranty type issues, or for cosmetic upgrades… (knobs/covers)

why no Rise 25, again, pretty common to release one model then later others…
release the Rise 49 now, you might get Rise 25 owners to upgrade to the higher price model.

then after a few months, release a Rise 25, for those not tempted… and sell it as a portable option, see if you can get people to buy both

Yeah I would never expect them to offer such an upgrade.

As for other sized Seaboards in future, its hard for me to predict because of their history of losing vast amounts of money. Even in 2020 when they had moved onto Lumis, they managed to burn £4 million pounds of UK taxpayers money via an investment they got from the UK governments pandemic ‘future fund’, and it didnt even keep them going for that long. And I dont see anything in the current entities business model that implies profitability.

No, I think he meant existing hardware surface upgrades

companies (in any field) very rarely do hardware upgrades

I think you’re still imagining that I said something other than what I said.

My exact words were:

I would like an upgrade path on the keywave surface, though. Let’s make Rise 1.5 a thing.

eg, an option to purchase the inexpensive replacement part, at a huge markup, bringing the RISE 49 halfway to Rise 2 status.

Many companies, in many industries, do offer replacement parts at a price, for third parties to install.

Automobiles and mobile phones are both obvious examples, but this is more directly related:

What I’m asking for now would be essentially that. Just, with an updated replacement part.

As in “here’s a new product for our legacy customers to purchase and have installed at any of these authorized service providers, thus creating a secondary revenue stream from the same production effort.”

I’m not sure how that was confusing, or why it’s such an outlandish idea.