I’ve just released the persistent configuration editor for the Striso board! It’s a beta, there probably are some bugs, please test it! You can find it in v2.1.5 on firmware.striso.org.

The editor can be opened on a computer in a web browser. Connect the USB cable with the settings (square) button pressed, now it should attach as a flash drive. Open the file CONFIG.HTM, which should open a web browser with the configuration editor.

Saving the configuration doesn’t work with the Safari browser, please use another browser for now.

There’s four parts: General, Preset, Tuning, and Calibration. Switching between presets is done with the row below tunings, which was dedicated to MIDI Program Change. It still has that function by default, until you change the presets to do something else.

It should be pretty self explanatory, but please ask about anything that’s unclear.

Minor improvements on the config htm:

I love it! I created a few different presets and everything worked how I expected. I only got my Striso fairly recently and this update takes care of every feature request that was starting to bubble up in my mind apart from one relating to Y/CC74 that I will make a different thread about. Thanks very much for your work on this update.

Thanks a lot!
But before updating I wonder if I will loose the modifications that you have sent me to have 61 different notes?
How keep them while updating to thelatest build?

Thats strange, it works perfectly for me. Ive got two presets where I disabled Y by setting it to 127, one of them is a MPE mode preset on the Striso and one of them is normal midi mode. And I’ve used a midi monitor utility to look at what data is sent by the Striso. And I’ve checked both the midi DIN and usb striso output.

Have you actually manually copied the saved config file to the Striso (on Chrome on my mac the save button saves the config file to downloads and then I need to copy it to Strisos drive) and correctly activated the right preset on the Striso?

edited to add - I suppose if you are using the firmware that included a double triggering fix then maybe something having changed in that firmware is another possibility, since I didnt try that firmware version yet, just the one mentioned at the start of this thread.

Thanks for the help @SteveElbows. When I save the configuration file in Firefox, I save it directly to the Striso Board drive, which subsequently ejects the drive and the Striso LED turns green, indicating that it’s ready to be played. When I open the CONFIG.HTM file again, the previous changes are still there.

MIDI-OX is showing that CC brightness is changing despite that the configuration says that the brightness control is disabled. 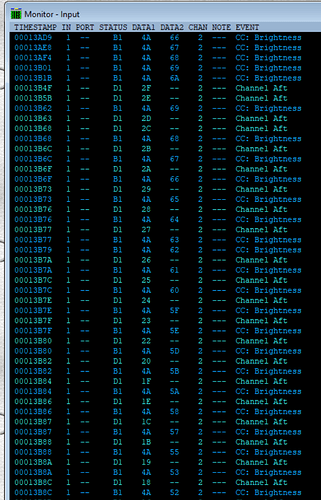 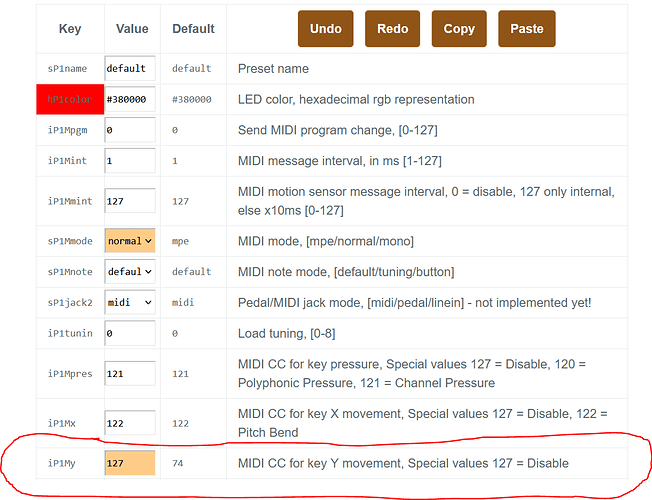 In that case I think we can narrow it down to you not actually selecting the preset on the device. You need to hold down the button with the square drawn around it and then press one of the note buttons that are immediately to the right of that button (the buttons that were previously labelled as being used to send midi program changes on the quick start guide sheet that came with the Striso). The first one will load preset 1.

It probably is logical that users might expect preset one to be automatically loaded as the default when you power on the Striso, but I dont think thats how it currently works!

Yes! You found my mistake. Thanks so much @SteveElbows!

No problem, I think I went through the same learning experience when I first tried this feature.

Perhaps it would make sense to also have a ‘default’ preset listed in the presets section, which is automatically loaded. Or have an option in the general section to select which preset is first loaded automatically at power on. But I note that the presets retain the ‘standard default’ value for any variable that is left blank in a preset when that preset is then loaded, and I havent fully thought through whether either of my suggestions would complicate that either from a code or user understanding point of view.

Can someone enlighten me which settings get persisted on power off? It’s not really clear to me.

I dont think any of the settings you make by pressing buttons on the device itself persist after power off.

Settings changed via the new web-based editor do persist, but if you make changes to a preset you still need to load that preset every time you switch the Striso on.

Apologies in advance if I’ve somehow got any of that wrong.

Thanks for all the feedback, some of it is already implemented in the new v2.2.0 release. Other things still need some more time after the summer holidays, like a keymap overview, and a more intuitive layout without the internal variable names.

@SteveElbows @floen The first preset is now renamed to ‘preset1’ instead of ‘default’ to avoid confusion. Also there is a note that presets have to be actively loaded and only the General settings are loaded on start up.
The idea behind not automatically loading a preset is that the Striso board always is in a functional state after start up, while with a preset it’s possible to get it in a non functional state.

@mmuehlenstein What @SteveElbows says is correct, again so the Striso board is always in a functional state after start up.

Undo and Redo are not available on screen when you’re scrolling down. But consider removing the buttons altogether (I don’t forsee their use very much).

Undo, Redo, Copy and Paste all have keyboard shortcuts (not tested how Ctrl-Z and Ctrl-Shift-Z work on a Mac I realize now), so the buttons are not so necessary or could at least be smaller with just an icon. Undo is very useful in combination with copy and paste, as it can overwrite a lot of settings you might have just changed.

Have you tried reaching out to the Intuitive Instrument crowd to team up with them?

Keyboard configuration is crucial. But sadly it looks like you’re walking a path they have walked before you and are moving away from. The same button being used as a note, as a parameter, as a virtual instrument chooser… confuses people like crazy. Their tech support spends hours and hours explaining configuration again and again and again.

Their choice to go with an app with an actual screen to make the configuration UI so much easier to understand is a very wise one.