Although NOT MPE… (maybe in the near future, who knows…) 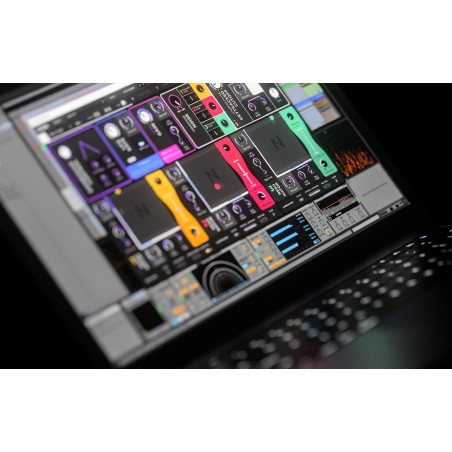 (yours truly did some beta testing and suggestions

What did you think of it?

To me, it does has its unique character/flavor.

What we witness these days, in pursuit of something new is this kind of inversion of things.
Big > small, chaos > order …
Noisy starting point: noise (many/all frequencies) to shaping a timber; instead of commonly one sine/square/triangle wave and its harmonics…

“Dual-engine” - Layer 1 and 2, maximum poly of 8 voices and supports multithreading. Exposes 275 parameters, easy MIDI mapping (midi learn) of 8 of any of them.

Hmm, tempting… I’m fond of the Touché, so still useful for me without MPE.

I don’t have one (you can’t have them all) maybe now the perfect excuse!

From the publicity, I couldn’t discern whether it processes external signals, or only internal stimuli. Can you enlighten us?

It does NOT process external signal.

Thank you very much!

Anybody knows if MPE is on their roadmap?

And another question: what are your experiences with iLock? I don’t hear good things about it and it seems Expressive-E only works with it.

Anybody knows if MPE is on their roadmap?

Oddly enough, we actually do.

I asked support. We are sorry to say that Imagine does not support MPE. We hope that it can eventually happen but there are no current plans to add MPE support to Imagine. Contrarily to Noisy, where we are already testing the MPE implementation for a future update, in the case of Imagine we also depend on AAS to adapt their technology so we can build the needed functionality around that.

what are your experiences with iLock?

This is only my experience but I have had zero problems with iLok (despite initial resistance to the idea). In fact, I’ve come to prefer it to roll-their-own licensing solutions; everything’s in one place and there’s a consistent policy around license deactivation (you can always take a license off of one machine or key and put it on another one; some companies give an arbitrary limit like 3 or 5 computers and you’re left emailing them if you changed systems, the hardware ID changed due to upgrades, etc.)

iLok has been generally fine for me in day to day use.
however, a couple of time, Ive had issues with new products/upgrades.

basically, Id purchased something - the dev is happy, and say they have allocated the license, but then something goes wrong, and doesn’t appear in iLok… ok, that’s not an issue ‘things go wrong’ , that’s part of life.

the issue is, you then contact the dev, and they say they can’t do anything, as its now all in the hands of iLok, and then iLok can faff for hours/days to resolve the issue.
iLok blame this on the dev not responding, the dev blames iLok etc… its all pretty frustrating… though eventually sorts itself out.

but in fairness, as I said, Ive only had this a couple of times.
so… whilst I’m not a huge fan of iLok, it would not be a deal-breaker for me (*)

(*) also, Im happy that they have the software iLok form, the hardware usb dongle form of iLok and eLicense, always concern me that the dongle will stop working … and then YOU end up paying for them to recover their hardware failing!

I’m not sure where my hardware iLok key is right now. I think it’s in the garage, still packed from the last time I moved. But I have gone looking for it a few times, and who knows?

I have two plugins installed which rely on that (and some more that are not installed), and for the most part, can get by without them. Except…

My DAW takes forever to load now, because it’s unable to validate those plugins, and has to bring up a prompt and wait for me to acknowledge that it’s disabling them.

(They’re installed though the software iLok, but that still wants the hardware for whatever reason.)

I’ll probably just uninstall these two. Honestly, I wouldn’t have bought them if I’d noticed the iLok requirement.

I find it overcomplicated, and the underlying mistrust draws me back. I had a chance to try it but immediately regretted and asked for my account to be deleted. So as inspiring as Noisy can be I think I’m going to learn to live without it

I can live with Arturia’s Software Center but the classic 1, create an account and 2, download your license key (Ableton, Bitwig, Madrona Labs…) is more than enough.