I just found this one and although I feel I should perhaps refrain a bit from posting a lot of new hardware things I found this one of both personal and general interest:

Modern, easy-to-use & versatile hardware sequencer. It brings together a powerful sequencer, a looper, a rhythm generator, a real-time effect processor, a midi controller and an input+output interface.

I am still reading about the sequencer and so far I find it slightly vague about what full MPE capability actually is. You can connect f.i. a Linnstrument and you can record MPE midi. I am not sure if the pads themselves support any kind of sensitivity, velocity included.

yes, If you connect a linnstrument you can record /playbank mpe on a track.
works well.

In firmware 1.0 HAPAX is able to record MPE (into a single track

)
the missing element is per note edit , which is planned - Ive been talking with Squarp about this for a bit… it’s going to be good!

No, the pads are not velocity/pressure sensitivity.
Im guessing one we get per note editing, you’ll be able to program steps with expression - but its not there yet, so we don’t know.

ok, Im allowed to now let the cat out of the bag …

Ive been a beta tester for the Hapax for a few months, and so been testing, reporting issues and making suggestions for improvements

Ive also focused on the MPE side …so Im happy to say it works really nicely,
Ive also talked to Squarp about how to handle MPE, its pitfalls, what I think would be good approach to editing etc… and can say they are really ‘on the ball’.

thats why I could say, it really could be the first true MPE hardware sequencer…
(and thats even without some ideas we talked about with using algos for generative MPE !)

anyway , back to my setup thats been my fav for a while 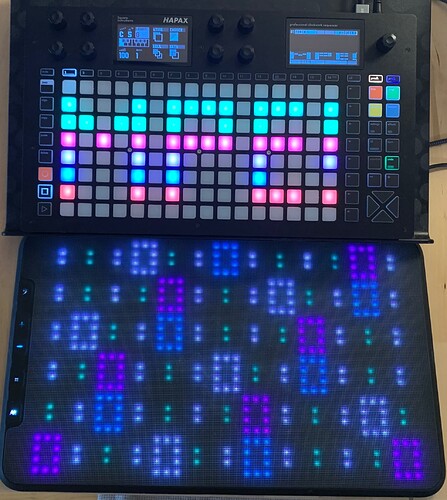 Its great to hear that you’ve been working with them on this.

The Hapax ticks all the right boxes for me so I ordered one even before learning of your involvement. Because I know from the Pyramid how Squarp like to do things, and their workflow etc is compatible with my brain. Also when considering MPE its important to have multiple midi output ports due to the channels on an MPE output port all being eaten up by the MPE, and the Hapax seems to meet that criteria.

I wasnt aware that only one track can currently use MPE though, is that what you are saying?

I was aware that display of MPE data and editing/creation of that data from the device isnt there yet, but is planned. Is it correct that if notes are moved around that do contain MPE data via recording, that the data is correctly moved with the note during editing?

Actually dont worry about answering my question about only one MPE track, because I just read your posts on the Squarp forum and understand that I misinterpreted your “In firmware 1.0 HAPAX is able to record MPE (into a single track

)” - you meant that all the MPE data can be stored in a single track, not via some clunky ‘not really MPE’ solution which would require each midi channel of MPE to use its own track. You didnt mean that only one Hapax track can store MPE.

yeah, exactly… some sequencers/dws you can arm multiple tracks w/ different midi channels, and record MPE that way… but as you say thats pretty clunky. whereas this is ‘proper’ mpe track support.

the main limitation I had, when was using a computer, I really wanted to have multiple USB ports (*) , so I could target multiple (mpe) DAW tracks/vsts.
anyway for now, I worked around it , by routing some traffic thru my mioXM over DIN, as well as the direct connections to the computer via USB device.

of course, this is a non-issue if you are using MPE hardware synths, since you will likely be using different DIN/USB connections anyway.

(*) USB Host/device supports up to 16 ports or 16 channels.
I mentioned this to Squarp, and they said, they did not know this was possible, but liked the idea and would look into it.
my suggestions was for 4 virtual USB ports would likely be enough for most uses e.g. USB Device A-D

but we will see… with it now in the wild, Im sure they are going to get inundated with feature requests etc.
and they will of course have to prioritise bugs->already ‘promised’ features → new features

fortunately MPE editing was on the ‘promised’ list, so hopefully wont be too far down the line. 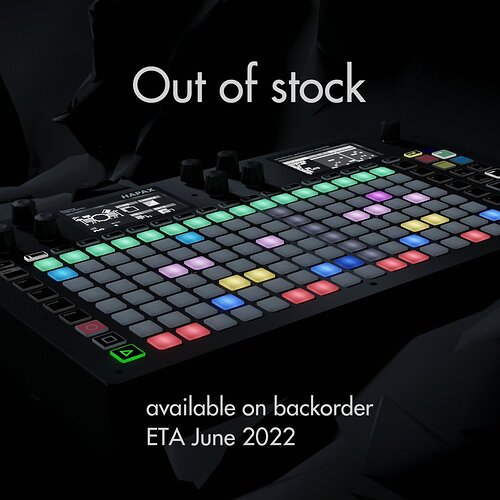 yeah, and that was before Red Means Recording video…

Squarp have said, they’d hoped it would be popular, but were amazed out how quickly it sold out.
… it sold out before ANY demo videos were released, just the 50 second ‘advert’ and the manual.
( I think their stock was sold out in < 24 hours or something similar , crazy for a 1000 euro sequencer!)

I think perhaps largely because of Squarp’s reputation for their sequencers (Pyramid/Hermod), so even without seeing it many had confidence it was going to be good.

now with Jeremy’s (RMR) saying its basically the best sequencer on the market (perhaps excluding Cirklon… but you cannot get them anyway)… I hope Squarp have got a lot of units in the next batch.

anyway, just to stoke that fire, and excitements some more…

as above, I was lucky enough to be given the opportunity to be a beta tester for the Squarp Hapax.

I’ve watched it developments, and got a really nice feeling for the Hapax, and yes I love it !
In this video, I go through what it can do and how Ive been using it.

of course, even though its an hour long (!) , with such a complex beast, some things are covered briefly … If you would like to see more about certain features, leave a comment on the video.

Ive also got a specific eurorack/hapax video in the works - let me know in the video comments, if there is something particular you want to see.

similarly, if you’d like a ‘comparison’ of Hapax/Hermod/Pyramid … again pop it in the comments.
(Im thinking primarily, the difference in ‘approach’… not feature X is in pyramid etc)

Grab your favourite beverage and enjoy

ok, you know Im deep down the modular rabbit hole…
so in this video, Im exploring how you can connect Hapax to modular gear,
what possibilities does it open up?