Hi folks,
I’ve been working on getting my head wrapped around doing midi work with the Striso and have a bit of initial results. This is just a mapping of all of the midi outputs from the Striso, but I figure that it will give someone else coming along a head start. 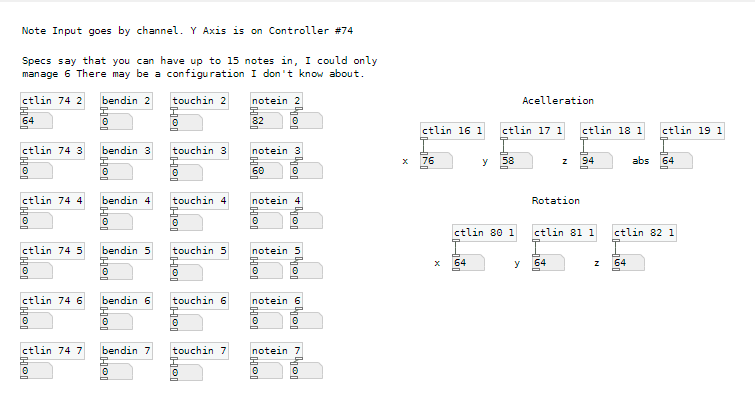 When I have something a bit more useable I’ll make it into a proper patch and put up a repo to share it out.

It took a bit, but I have a first prototype of my ‘perfect Striso’ software written in Pure Data. The target for this is to add different ways to play the Striso expressively. My current work can be seen in a brief video. The goal is to be able to:

This is only a prototype and there’s a lot of work to be done. Current known issues:

My next steps:
I still need to get better with PureData in general, so anything working with it will help me learn what I need to fix the various bugs. I’m interested in making interesting voices so I’ll be working with Andy Farrell’s “Designing Sound”

Updates will come as I have them. If you’d like to play with it yourself, the GitHub repo is here.

Are you familiar with the Critter & Guitari Organelle? It’s a cool little device that runs Pd patches. I have one, and I’d like to be able to control it with my Striso board. I mean, I can use the Striso with it, but most of the current patches don’t support MPE. So I plan to work on that (if/when I can find the time, and when I’ve learned more than the tiny bit of PureData I know). I’m guessing your work might be a good starting point for getting the most out of Striso Board + Organelle.

Anyway, I’m forking your Github repo, and I’ll see what I can do with it.

Hi Caelia, thanks for reaching out. It happens that the Organelle is exactly what I’m working with. I haven’t made a lot of direct process, I’ve been studying Pure Data and sound theory for the past several months and am just starting to move forward again now.

I’d love to see what you can do with my work so far and will be happy to reach out when I have something more polished.