Anybody out there with experience on this controller? There is a new surface, the great fretboard, in which I could be interested.

Differences with the Sensel Morph? FYI I’m not interested in developing my own interfaces, I like the immediacy of the Joué.

I’ve just sent these questions to Joué HQ but if you have answers, I’d like to hear. If I get answers from them, I’ll let you know if there is interest.

I have and pretty much enjoy playing the Joué, although don’t have this latest module.

With each firmware updates new things are added and refined.

Nice, thank you. So you don’t have the small string pad either? It’s very important to me to be able to play more than one one per string.

And do you have the pad grid? The one used to play drums? If you have it, can it be mapped to notes, like the Roli bocks?

I have two Joués and at least one of every module. I am thinking of selling one of mine, as I don’t have a huge need for two of them. I can answer your questions, or at least try to… and if anyone is in the market for a Joué, barely used and still in the box with a very big selection of modules, please message me.

I have sent you a PM

I have the Fretboard module (the smaller one with strings). As of right now, it can only be played with one note per string, as far as I can tell (although I could be wrong). There is nothing specific to the hardware that forces such a mode, however, and it’s possible (likely, if you ask) that the Joué folks can add a “grid” mode where multiple notes can be played per string.

This isn’t something I have pursued myself because I have an Artiphon INSTRUMENT 1, which can be used on a table or worn, so I haven’t used the Fretboard much.

The Pads can easily be mapped to whatever notes you want.

so… anyone got the buchla thunder overlay - thoughts?

So how is the feeling compared to the Artiphone? Those strings were too hard for me.

@thetechnobear that Buchla overlay was for the Sensel, wasn’t it?

sorry, you are absolutely right… after some wine … getting confused these days

So, it’s the wine’s fault

The Joué is by far the softest feeling of all the surfaces. Some people don’t like that, but it’s very easy on the fingers.

I got answer from the Joué customer support. So far, the fretboard can’t play more than one note per string at a time. Tuning of the strings other than guitar normal tuning is not possible (support wrote “can” but I believe it was a typo because they also invited me to try the editor, which I did, and that was when I found that it can’t).

Pads are pressure sensitive and can also do vibrato but glissando is not possible. I was thinking on a Linnstrument type of set-up.

Regarding the scaler, chromatic scale can be set, allowing for a Dodeka style keyboard. This would require painting or marking the keys in major third patterns.

Actually, the only reason I was attracted by the Joué (apart of natural curiosity) is that, by what I can see on the videos, there is more pressure feedback on the silicon surface(s) than on the Linnstrument. Someone said here (sorry, cannot remember who or where) that the Linnstrument is like playing on a board, and I agree.

This is the actual state of the Joué but it seems they are working, improving and adding features constantly so it could change in the future.

Apart from the hardness of the surface, I still think the Linnstrument is my instrument.

So far, the fretboard can’t play more than one note per string at a time.

Yes, that has not change; now that is kind of a strange request from a user and contradictory, as this Fretboard module pretends to emulate as close as possible a 6 string guitar or bass or real string instrument; sure it could have a “polyphonic-string-mode” and instead of notes could output MIDI CC’s or sysex or OSC and… its a Fretboard module.

I recall and have used a “Custom mapping” setting and with that you can change its MIDI Ch and per string its starting note, so its easy to have any running you like 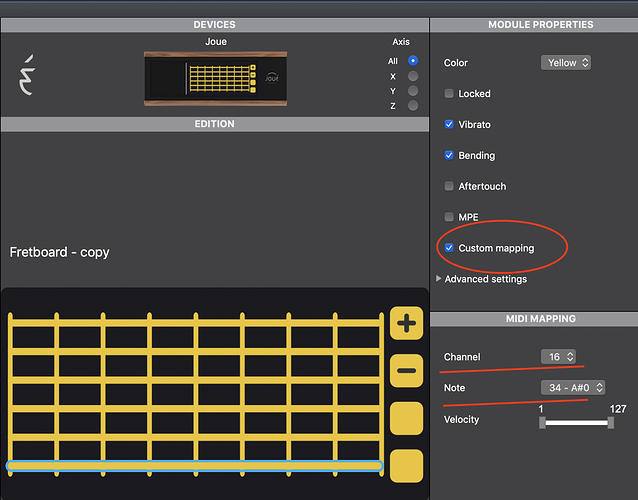 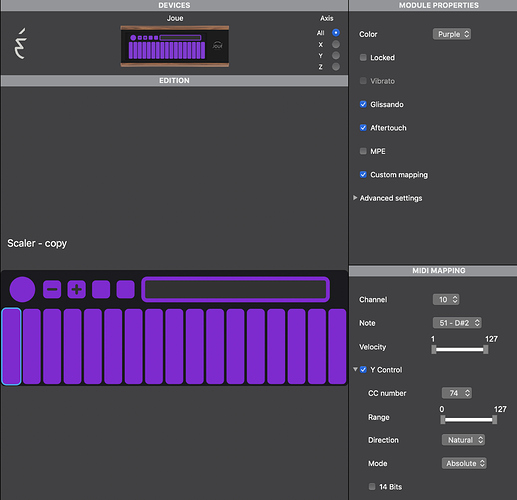 About pressure, yes you do have to press in a bit more, say then LS and as most Joué modules are a bit thick, you do get some feedback.

I also have an LS that its crucial part of my last show, have not mixed both (LS and Joué) outside my studio… but I love the Joué; its fun, expressive, engaging as you are swapping things around.

Oh, I see. I remember trying a different tuning and only finding “guitar”. But I didn’t try custom mapping. Maybe it’s a contradictory request if you think emulation but what interests me it’s the grid not the emulation. The Linnstrument has both modes and as it is a question of midi settings I don’t see a problem with it.

Thank you for the description on the pressure. That’s my major problem with the Linnstrument. That said every time I play with it I have a lot of fun. Pushing strings on a feet is also hard.

If I could afford both I’d buy it but for now I will wait.

I haven’t plugged mine in in a while, but I imagine my frustrations are still basically frustrating.

Specifically, there was only one USB MIDI endpoint, shared between every one of the overlays. And no support for other protocols (such as OSC) which might help a patch tell which overlay is connected.

If you’re not using MPE, you could set 16 overlays up, each on their own channel, controlling a separate instrument.

If you are using MPE, you can limit how many channels that one overlay is using, qnd put the rest of your overlays on the remaining channels (with a limit of 16, in total).

If you’re using MPE on two overlays, they can either control the same instrument (why bother?), or they can severely limit your choices even further.

I think with the new full-surface overlays, and none of the previous ones, that paradigm can be worthwhile. But with the full stack of overlays many of us bought in the Kickstarter, you really have to choke down your ambitions.

(Again, possible they’ve fixed this. But it didn’t sound like they were interested in addressing it, last I checked)

Seems all good ideas to send to the Joué developer team

Seems all good ideas to send to the Joué developer team

I’ll get right on that, in March of 2018. (I’ll be more specific there, and also propose solutions that weren’t mentioned here)

Oh, look; they already responded! That was fast.

Thank your for this detailed feedback.

To finish with, to use several USB endpoints might confuse a lot of users. For your usage it would be better to have several Joué

Again, thank you for your feedback and your optimism. Feel free to continue sharing your ideas, usage and so on.

Per their encouragement, I wrote them once further, with a very detailed examination of three separate aftertouch issues.

(That one, they did not write back to. I would assume that they’ve fixed two of those since then, even if they deleted my email without reading it. But again, I haven’t checked.)

Thank you very much for sending in ideas so we all can have a better Joué. (I do have some ideas I should send also)

I still have one for sale, with a bunch of overlays, if anyone wants it. One will be plenty for me and I don’t need two.

I wanted to love the Joue so badly. But I think MPE channel aftertouch implementation is a complete mess, at least with the Scaler overlay. I posted about this on their fourm a long time ago, but instead of promising a firmware fix they started going on about a sensor limitation. And since then I think they got rid of their forum completely.

If you just hold one note, the messages are fine. But when you press a second note and add pressure, the pressure messages of the first note falls as the 2nd notes pressure rises. Useless!

Midi monitoring software will confirm whether other people see the same behaviour. Its much easier to see whats going on if you have something that can draw a realtime graph of the data…

If you have a mac, I would recommend OSCulator (trial version available) to visualise the issue:

Run app
Press settings cog button at top right of window
Enable Joue Play in the Midi inputs.
Exit the settings screen.
Press two notes at the same time on the Joue
In the list, select /midi/pressure/2 and then press the eye button at top right of window
Do the same for /midi/pressure/3
Arrange these graph windows so they can both be seen
Experiment with holding 1 note and changing pressure, see the graph behave as we would want
Add a 2nd finger and experiment with different amounts of pressure on each finger. See how the graphs show the unwanted interaction between the two pressure values.