the only way, Ive found to do this so far… is by going to the Osmose , hitting save, and naming there.
can I do this from the EM editor?
it would be much easier to type a name into the editor

( I looked in control text, but none of the presets seem to have the name in there)

I know I can save/load to a file from the editor… but I, dumbly, can’t find an option to save/name to the instrument.

okay , figured it out…

its not in the Eagan Matrix Manual, its in the Continuum Manual p85
basically, I need to save as a midi file, then use a preset group file.

actually you probably can just load the midi file into the preset and it’ll work.
but there appears to be a small UI bug on the osmose, that the name will not update, until you move off the preset screen. and back.

anyway, I guess the workflow is to always save presets to your computer… and manage there.

id probably only bother with the osmose save screen, if you are adapting an existing preset.
… and if you do that… then your going to need to be careful with saved preset files on your computer.
as it’d be easy to loose changes you’ve made on the osmose.

( I guess, you’d have to save the group in the eagan matrix editor, as I assume that’ll download changes from the osmose)

( * ) starting to notice, theres a few things in the Continuum manual that Osmose users are also going to need to know.

There’s a trick @thetechnobear : (or maybe its documented, not sure anymore) 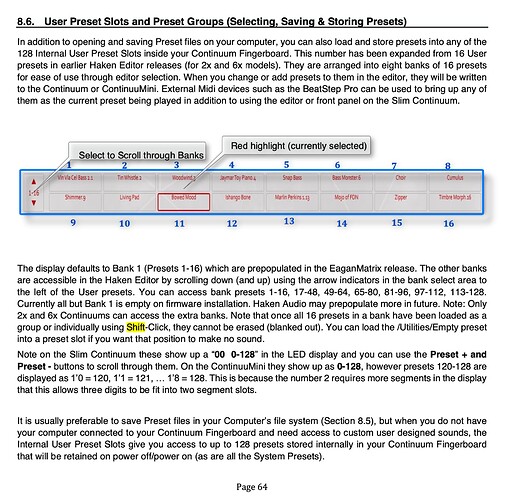 Managing presets in the Haken Editor takes some getting used to. It’s one of the clunkiest things about it. The only way to give a new name to a preset is to save and load from a file. The preset name comes from the name of the file. You don’t have to use the default name the editor makes for you.

The name doesn’t even exist inside the preset file.

As long as you’re careful, you can maintain presets strictly on the device, but I wouldn’t recommend it, and you can’t name them from the HE.

They’ve taken some care to make the on-device interface much better on the Osmose. I’m guessing the team has taken a lot of the feedback on the Continuui to inform the design for the Osmose.

yeah, thanks @keymanpal , I found this out when I checked the continuum user guide… that was the ‘missing bit’

(I spent ages, randomly clicking on things… to try to intuitively it)

Managing presets in the Haken Editor takes some getting used to. It’s one of the clunkiest things about it. The only way to give a new name to a preset is to save and load from a file. The preset name comes from the name of the file. You don’t have to use the default name the editor makes for you.

yeah, I got there in the end.
indeed not very intuitive… and a bit inflexible (esp how you choose what to save, or where to load) but it’ll ‘do the job’ - so im ok with that

Its also true the Osmose display kind of ‘changes’ things a bit… on the continuum the preset name wasn’t that important as you couldn’t see it… so Im sure over time this’ll be improved.
(also the Osmose has a few bugs where it doesn’t update the display is some scenarios, which in this case, just aided the confusion)

but again… once you know how it works, its absolutely fine…

yeah, spend yesterday morning to figure that out also, sending Program Change+MSB+LSB and nothing was changing on screen (but change DOES happen

As it happens, I’ve started writing some software to interface with the Eagan Matrix-based products. The general idea is something focused on performance with a great touch experience. Easy preset use is definitely an area to investigate. I know about the SpringSound app (IOS only). The general idea is that if my project works out it can fill similar needs on Windows (and perhaps other platforms in the future, if successful).

It’s very early days yet but making steady progress. I have no GUI, but I can query the device for presets and decode most of the settings. I can also read the preset .mid files. It turns out these are completely standard MIDI file format and are basically a recording of the MIDI sent to/from the device to load or change a preset.

I have received amazing support and encouragement from Haken audio for my project. I’d love to hear other people’s ideas about what they’d like to see in an EM companion app.

Happy to know of your endeavours on new software/interface.

Ed and Lippold are always very supportive of new ideas

Most certain, every user as you say of a EaganMatrix based product has its own way of interacting with it, personally I have never really favourite any of the available, probably do to the diversity of projects I have used either the Continuum or the ContinuuMini;

Early days for the Osmose, but users do get much more hands on (ahah and a colour screen) dealing with the sound engine;-)