I thought I’d start a thread with details of my Tau repair project; hopefully it’s useful and others can share their experience and advice. The era of maintenance may be upon us; it’s unclear what the fate of Eigenlabs is, as I have been unable to contact anyone there in three months (despite one initial success), the official forum seems to have dried up, and AFAIK @Kai is the last one able to buy so much as a cable almost a year ago. It would be a shame for these amazing instruments to all waste away. Eigenharp’s long term future depends on not having a single point of failure. Open-sourcing the code was wise but the hardware is still vulnerable to obsolescence.

I was too late to get a new 'harp so I bought this broken Tau from someone local. From the description of gradual onset of amber basestation light and flashing green mode key, I hoped it was just a cable problem since the Tau was getting power.

To recap, the amber light means the basestation does not think it’s connected to an instrument, and the green flashing mode key means the instrument does not see EigenD. We also know that power is shared with the data lines so a sketchy cable could lead to this scenario.

The cable had taken a beating on one end and did have some opens, which I fixed. In the meantime, I researched the parts needed to make a new one since it seemed like a good idea to be able to make more.

The instrument cable’s connectors are Neutrik miniCON, using 5 of the 12 available conductors. If you were to make your own cable, I would go with the solder-version complete set (MSCM12) as it has everything and you’ll end up with extra pins for practice. The ones made by Neutrik for Eigenlabs are crimped but the crimp tools and dies are $thousands and have huge lead times.

The cable itself is star quad microphone cable. For the Eigenharp, 4 of the 5 lines (the 5th is grounded to the braided shield) apparently serve as a balanced serial link so star quad is very good for stage applications.

I was not able to identify the cable manufacturer but a good choice for replacement seems to be Canare L-4E6S or Mogami W2534, although I have not yet verified that the cable diameters are compatible with the ferrules that come with the MSCM12.

IMPORTANT: They are not wired like typical star quad XLR microphone cables, where both conductors of each pair color are tinned together. For the Eigenharp each conductor gets its own pin. I’m guessing each pair is a dedicated differential unidirectional serial line, one for send, one for receive.

I did a careful job fixing the cable and checking the continuity and resistance of each line. I even opened the basestation to measure conductivity all the way through to the PCB, to make sure there was not a problem with pin length or mating. 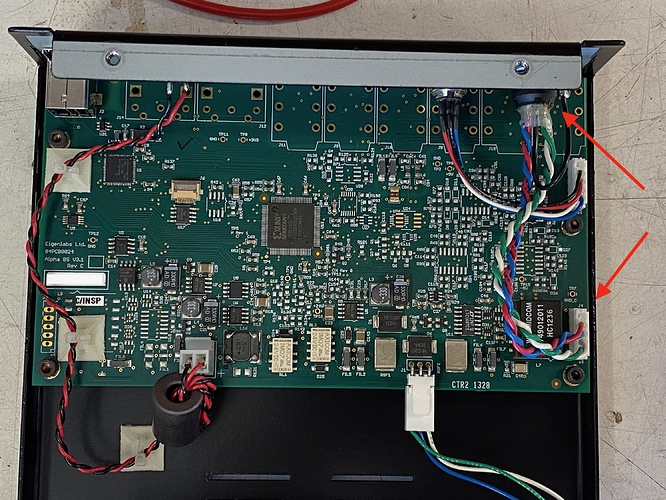 Unfortunately I was still getting the amber light.

This is where I started to get nervous, because @thetechnobear said John has warned people that opening a 'harp could require the keys to be recalibrated. But after enduring a few months with no other prospect than fixing it myself, I decided to open my Tau.

The Tau has a plastic footplate flush with the monobody, which has a receptacle for the cello spike, the instrument cable socket, and the drip tube (eww). Mine was wobbly so I suspected a connectivity problem.

It was clearly secured from the inside, so the only way to access it was to remove the backplate below the strap harness. Two of the screws are covered by the warranty sticker. The backplate has a rubber gasket underneath. 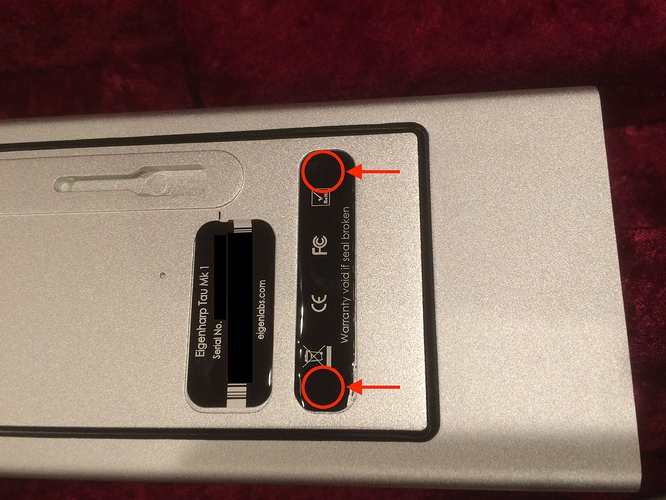 As the backplate came off, I felt movement which I later realized meant trouble.

The two sprung rails on either side make electrical connection with the body, but also have foam underneath which apply a scary pressure to the board. This was all interesting but I didn’t want to mess with anything that might cause key alignment problems so I left that all alone.

The footplate plastic with a thin O-ring seal snaps on to a machined aluminum part that is inserted from the bottom and secured to rest of the base inside with a single screw. This screw was loose on my Tau. 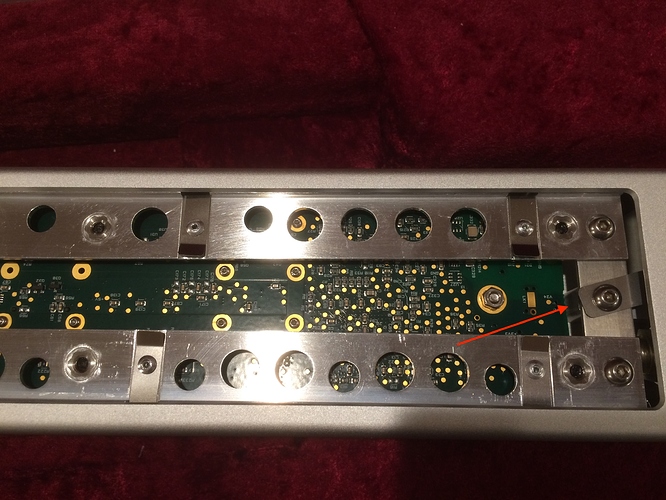 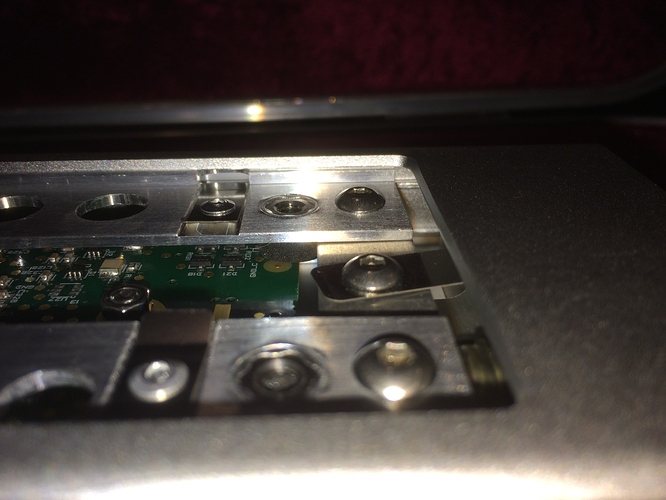 In addition, directly underneath the screw head is a stiff L-shaped strip of metal that protrudes enough to touch the shell of the Neutrik socket. Because the screw was loose, the strip was dangling and not making connection. 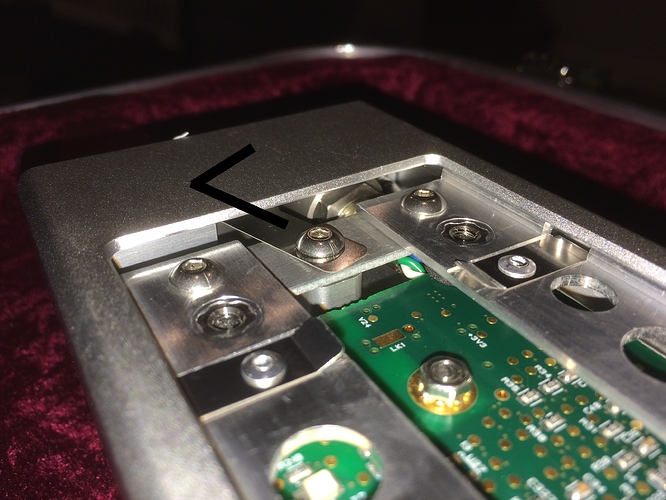 So I reoriented it and tightened it down. An ungrounded cable housing might have been enough to cause signal problems even though power was fine.

It seemed a simple matter to put the gasket and backplate back on, but the screws just would not bite. After investigating, it was clear that the sprung rails were screwed down on only one end and were pushing themselves out of place at the other. 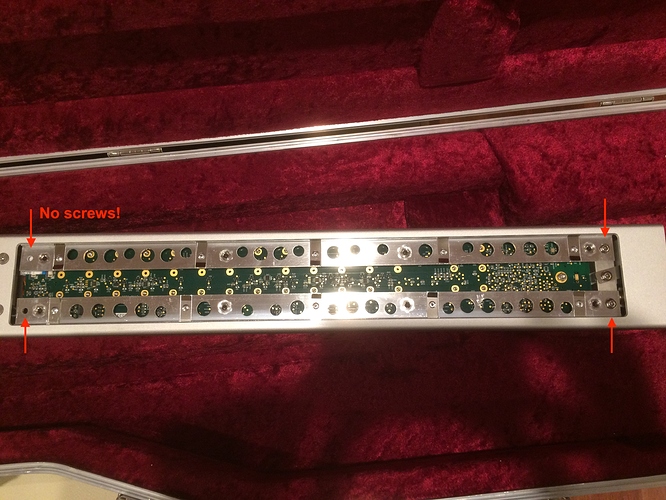 Eigenlabs must have some tool used for reassembly, I can’t see any other way. For a while I thought I was going to have to machine a shim to maintain the spacing yet still fit in the scarce space not obstructed by the gasket or backplate, but finally I was able to manipulate it to get the top pair of screws to match. It took maybe an hour to do and there’s no way they assemble them like that.

I really do not understand the design decisions here but so much of the Eigenharp is so well thought out that there must be some reason.

I would have liked to get the footplate out more to check the Neutrik connections but the drip line seemed to be glued to its port and I couldn’t figure out how to detach it without doing damage. Now I wish I had spent more time on that, because ultimately the grounding fix didn’t not solve the problem. From what I could see of the wiring through a small gap, nothing looked amiss… 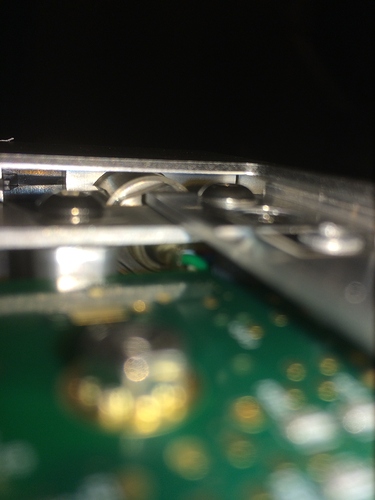 …but if the problem is not there, I’m at a loss for what else could be mechanically wrong. At the same time, what I know of the electrical design sounds pretty sturdy, so I can’t imagine how a user could have done electrical damage from normal use.

One positive is that I didn’t notice any problem with the key calibration. After putting it back together I still got the flashing mode key, but I did not have any percussion keys stuck on or off and they seemed to respond as before, so if there were changes they are subtle.

Hopefully someone reading this knows more and can advise. I know @gbevin visits sometimes!

I don’t have any suggestions what could be wrong, unfortunately. I just wanted to thank you for this info.

Everything I do musically is centered around my Tau, so if it stops working I’m in a lot of trouble.

I sadly don’t have much to contribute. I haven’t had contact with Eigenlabs in a very long time, the last emails I sent didn’t get replies. I never worked on the hardware, only the software. I do have to warn about opening Eigenharp instruments. I was told that when they’re opened up, the keys have to be recalibrated afterwards, and it’s a manual process on a custom jig that they only have at Eigenlabs.

I also didn’t hear back from John in my last mails a few months ago, hope he is well. @gbevin, can your remember who did the workshop repairs at Eigenlabs? Think it wasn’t John himself, he had hired someome to do it. Perhaps this person knows more and - with permission from John - might be able to share some details?

Yes, Wayne Nelson was doing the maintenance and repair work.

Thank you!
@flac, it might be worth to ask nicely?

When I was in contact with them a bit over a year ago, I was first emaling a bit with John, and then someone named Isabel was handling the details of the actual order. The email footer listed the same phone number for customer services as on their web page.

@flac sorry to hear you have not got it fixed yet

thank you for the images, its really interesting to see inside a tau, fascinating to get a tiny glimpse of the engineering involved.

unfortunately no suggestions from me either…
I guess the tau neutrik connector is the next suspect, but sounds like that is very difficult to get to.

the other thing that would really help, is if you could find someone that has a alpha/tau and basestation to test against… so you know 100% the issue is within the tau.
e.g. the basestation led goes red->orange->green, but as we don’t have the firmware source code, we don’t know exactly that these states means… could a failure in the basestation cause it to get stuck!?
I guess the working assumption is one of the data lines is ‘bad’ so it fails to sync with the tau… reasonable given the ‘data’ we have - but still.

That’s a good idea @thetechnobear . If there are any other Bay Area Alpha/Tau owners out there willing to try, please let me know!

Thanks @gbevin and @NothanUmber for the lead. I messaged Wayne last night on LinkedIn, let’s see what happens. I did note these ominous points under his Eigenlabs experience:

That’s a good idea @thetechnobear . If there are any other Bay Area Alpha/Tau owners out there willing to try, please let me know!

I have a spare base station and cable I can lend you for testing. I live in Norway, though, so shipping/customs back and forth is probably quite expensive… Anyways, at least an option if you need it.

Thanks Kai, that is super generous of you. I’d feel better shipping my stuff to you in case something went wrong with shipping. I’ve still got a couple tricks left to try yet.

I heard from John around August 21, 2020. I was asking about the possibility of another batch of alphas, and he said there might be one in 2021.

I have a working tau-cable-base station here in central FL that you could test against, if you are ever over this way.

Minor update: I haven’t had time to attempt a further fix, but I did manage to construct one end of a spare instrument cable from some popping red Canare L-4E6S and Neutrik connectors from Mouser. 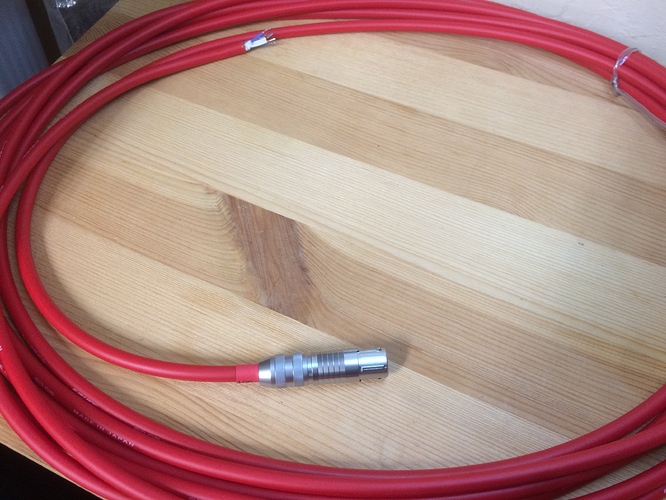 cable13264×2448 1.54 MB
I did not anticipate the difficulty, though, of soldering short lead 24 gauge 40-strand wire into 1mm cup terminals, and grounding the braiding was even worse. If/when I get a working system, I’ll finish it and see if we can say definitively there is a backup plan for cables.

Edit: here are the assembly instructions for the curious.