Getting close to delivery 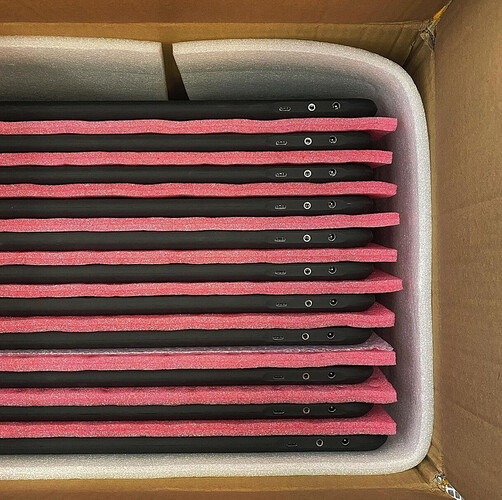 Yep!!! Just got my survey too

I already have one of those E-Drum Multi Clamp waiting… see how it goes positioning the Erae in various angles.

yeah, Im sad enough… I counted how many were in the box above (11

Im hoping this will arrive in time to use there… as i think it would be kind of cool… and also small enough to take in a small backpack.

Edit: nice to know about your “new ORAC” solution

I already have… pretty hopeful, but its going to be tight… esp. as Id have to think about exactly how it was going to be used…
Im hoping if they send out early next week, it might just make it !

Id guess the first 50-100 will all go out at a similar time…
and you have a better postal service, so it’ll be a race … I think you might get yours first.

This looks very cool, will be interested to hear about your first impressions…

Finally! But with a price increase of over 30% on the announced price I feel fooled.
So I skip over this!

(for now that is)

you mean the pre-order price (now) , compared to the RRP announced on kickstarter?
since KS backers, are getting it at the price they backed for…

I will say in this case, the KS pledges were particularly generous…
though we had to wait nearly a year (which was not really that bad)

as for the pre-order/RRP… I’d say things have changed a lot since the campaign was launched. not only the pandemic, but also the global chip shortage which is making electronics shoot up in price…
I fly drones, and the price of flight controllers has doubled or tripled, in recent months… just due to this chip shortage… which unfortunately is going to be with us for 6-12months longer

so I suspect that’s what is going on … and unfortunately, we are going to see more of it in the coming months in the electronic much tech world.

…no, I mean the RRP now compared to the RRP announced on kickstarter. That’s quite an increase.
As seen from now, yes ‘KS pledges were particularly generous’, seen then, not so much.

As seen from now, I would have taken the pledge, but now I feel a bit fooled (well, that’s psychology, I know that’s silly). And I know, things in the tech world are a bit rough at the moment, but all to often I feel, this is misused as sort of an excuse for sloppy management.

Meanwhile I have (and love) an LinnStrument and hope that things turn not bad with the Osmose!
Well, that pledge was generous!

I was interested in one of their comments last month:

“At this time two major improvements on the hardware happened thanks to Mr Roger Linn who helped us finding the right coating (polyurethane) to enhance the smoothness and feeling of the pad.”

With Roger Linn involved, it can’t be all bad.

good for Erae!
And yes, that is Roger Linn, never (much) interested in his own profit, but all interest for the benefit of all!

As seen from now, I would have taken the pledge, but now I feel a bit fooled (well, that’s psychology, I know that’s silly). And I know, things in the tech world are a bit rough at the moment, but all to often I feel, this is misused as sort of an excuse for sloppy management.

yeah, I know Ive ‘missed’ (or rather decided to not take part) a few KS, and indeed it makes the RRP hard to stomach later…

as for the price increase, yeah - it’s a tough one.
I always wonder if the RRP advertised on KS are going to be higher than actual ‘street price’, (to encourage you to back) - however, in practice Ive seen a few projects be a little more expensive when they actually are ‘released’… I think perhaps because often KS costs a little more than expected , so they have to ‘claw back’ a bit of the costs in the retail price.

BUT… in this particular case, I don’t think its at all sloppy management - component prices have gone crazy at the moment…

Its likely @embodme negotiated the prices for kickstarter units with suppliers upfront… and assumed they would stay much the same for the general release!
however, then we had current component price hike - so when they went back to ask for more, they likely had a nasty surprise.

(bare in mind, for its a a pretty new/small company, so they’d bought a limited number of components for cash flow reasons)

as I say, unfortunately, this is not going to be isolated… when current stocks dwindle (on music equipment) , and the manufactures ask for more components, we are going to see price rises - its inevitable at this point

… so, yeah… if you need any new gear for the next 12 months, best to get it now, if its not gone up in price… and is available.

… so, yeah… if you need any new gear for the next 12 months, best to get it now, if its not gone up in price… and is available.

(Un)fortunately I’m already deep into retirement which means on one hand, if I’m really interested in new technologies I better hurry up, my time is limited (and the Erae Touch is interesting!!)

On the other hand it means that I don’t need any new gear at all, I have already much to much of it!

My real interest is in software anyway, the core of it I write myself, so no stocks to dwindle there

Edit: They put in the wrong power supply for Germany

It’s 15V, my variable powersupply only goes up to 12V.
So, back to waiting state.

So, back to waiting state.

Ohhh nooooo…. Can’t it be power by USB-C? Instead of using the power adapter…

Apparently not, it doesn’t power on. But I use the provided USB-C->A cable (because I have an old Macbook), perhaps it would work with USB C all the way. No mention of that in the manual though, there it looks as if the power supply is mandatory.
Bad luck, I have gazillion power supplies, just not the combination this needs.

perhaps it would work with USB C all the way.

Yeah was thinking about a newer Mac with USB-C…

I have gazillion power supplies, just not the combination this needs.

Damm, it’s always that one missing, bad luck as you say; hope for a speedy turn around of that power supply.

mine has been shipped but they decided to use Mondial Relay…

which looks like its going to take forever … even though it was posted on the 3rd, looks like its not even left France yet - its not looking good for it arriving before Superbooth !
(well , not and leave me enough time to test it with the setup I planned to use it with)

what kind of power supply did they send?
isn’t it the same for the whole of the EU?

its a bit of concern, if they’ve sent out all of the EU batch with the wrong PSU!
(not sure, Ive got a 15v that’ll fit either!)

now hoping mine turns up before Superbooth, so If they have got it wrong, they can bring the correct one to Superbooth…

edit: just noticed the manual says 12-15v
they say, the psu is 15v @ 2A, so that’s 30w… but I suspect that’s on the safe side - I wonder what min watt is , if your using a 12v supply… you might be able to run it off a usb powerbank via something like ripcord adapter?!

This is what is needed/provided: 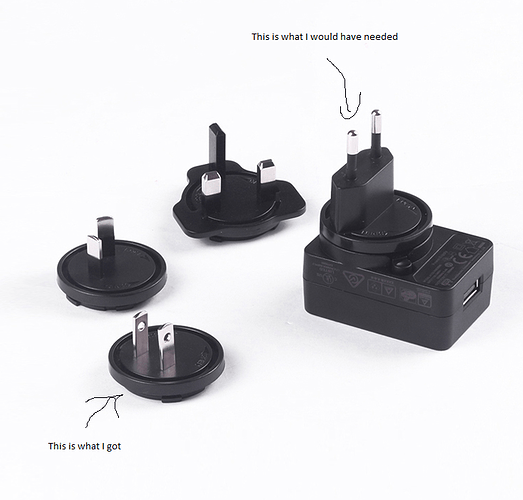 If I could find my travel adapter then this would probably work. It’s just the wrong top. Will have to search further…

has it got ‘replaceable’ heads? but you only got the US one?

edit: I guess the picture is not the exact psu supplied… as that’s usb output